JACKSON – Mayor Michael Reina has been known to use the expression “hitting it out of the park” when it came to the governing body’s work but a dozen red and white uniformed heavy hitters could have easily earned that distinction.

Members of the Holbrook Little League team, coaches and parents came out to a recent Township Council meeting and were presented with a mayor’s proclamation for their standing in the district this season.

“This evening is very special,” Township Clerk Mary Moss said. “We have Coach Holmes here and he has a few comments and then we will issue the proclamation.”

Holmes said, “I want to thank everyone, this is a really great honor. I know all the parents here tonight had their summer taken up with what was happening. Many volunteered their time. I want to thank all the coaches.”

Business Administrator Terence Wall read the proclamation on behalf of Mayor Reina and the Council. “This is all for guess who?” he asked the team. “It’s all for you,” he added.

“The team went on to its first ever 8-year-old State Tournament out of 108 Little League teams,” Wall said. Each of the players received their own proclamation certificate. “The entire team should be commended for a job well done.”

Wall added, “we hereby recognize and express sincere congratulations to the members, coaching staff and parents of the Holbrook Little League for their outstanding achievement and wish them the best of luck in their future baseball careers.”

Councilman Nino Borrelli complimented the team saying, “congratulations to the young men that were just here and winning the district 18 championship. That is a pretty awesome accomplishment at a very young age. Jackson Township is so proud of them and we wish them much continued success.”

“Congratulations again to the Holbrook Little League. That is quite an accomplishment and that is probably the closest you come to the Toms River East winning the Little League World Series so it was good to see some representatives of Jackson do so well,” Councilman Steve Chisholm said.

Councilwoman Samara O’Neill said she enjoyed “seeing Holbrook team coming in to the room with all that energy and little faces. Kudos to them on doing such a great job. I know some of the parents and they show a lot of dedication and I know that is shared by the residents.”

Holbrook Little League is a non-profit charitable organization whose mission is to provide a safe, instructional and fun environment for the children of Jackson. Their players are ages 4 to16 and they are chartered under the umbrella of Little League International, Inc, and Little League District 18 of New Jersey.

According to their website, Holbrook shares a mission to “to promote, develop, supervise, and voluntarily assist in all lawful ways, the interest of those who will participate in Little League Baseball and Softball.”

For more information about the Holbrook Little League that meets at 366 Bartley Road in Jackson, call 609-891-5898 or visit their website at holbrooklittleleague.com 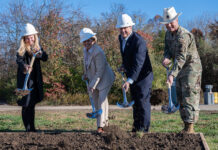