HOWELL – At a recent meeting of the Township Council, residents questioned an ordinance in opposition to Howell Township becoming a “sanctuary city.”

According to the Center for Immigration Studies, these sanctuaries are defined as “cities, counties, and states (that) have laws, ordinances, regulations, resolutions, policies, or other practices that obstruct immigration enforcement and shield criminals from ICE [US Immigrations and Customs Enforcement].”

On May 7, meeting regular Barbara Dixel called the ordinance “disgusting,” painting a picture of ICE agents ripping immigrant families from their homes in Howell.

“Other states and other agencies and other governments have declared themselves to be sanctuary cities to protect their residents,” said Dixel.

In response, Deputy Mayor Evelyn O’Donnell said that the council was simply trying to be “proactive.”

Resident Tina Smilek stated that she wasn’t in opposition to the ordinance, but still wanted to see more background for making such a declaration. She noted that “sanctuary city” is a broad term and more minor details might need to be fleshed out in order for the ordinance to resonate with residents.

“There’s different reasons for not wanting sanctuary cities…I mean, there’s people that are immigrants that actually may need help, so I don’t want to cut out one group of people for another,” said Smilek. “It’s very explosive right now…I just wish there was more to the resolution so I could understand where you guys are coming from.”

While Smilek had many questions on the topic, the council did not immediately have answers for her.

The ordinance favors other pertinent issues over aiding undocumented immigrants, stating that “the State should instead focus on reducing spending and providing property tax relief to the legal residents and taxpayers of this state who are burdened with the highest property taxes in the nation.”

A public hearing and adoption of the ordinance will be held at the May 21 meeting at 7 p.m. 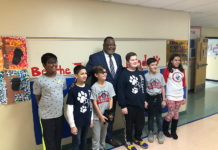