HOWELL – There were some tense moments at the Xscape Movie Theater on Route 9 in Howell earlier tonight. Calls came in to the police department claiming there had been a shooting at the theater. A loud noise occurred towards the end of a movie screening which sent moviegoers into the parking lot, shaken up and understandably concerned.

Howell Township Police say it wasn’t a shooting but a heavy electric wheelchair battery. According to a post on their Facebook page from Chief Andrew Kudrick, a disabled person was inside watching a movie when their caretaker arrived during the screening and placed the battery on the floor which made a loud noise sounding like gun shots. The sound echoed through the theater and sent people running for the exits. There was confusion at first when people called 911 and several units were called to the theater from Howell, Jackson and Lakewood.

Police were quick to dispel any rumors on social media. The caretaker was detained for questioning but subsequently released.

Chief Kudrick said “We thank all agencies involved for their assistance. We also acknowledge the patrons who thought there was something suspicious and did something about it. They didn’t ignore it. Although this was not a legitimate incident, all the patrons thought it was at the time. This is another example why it is so important if you “see something, say something”.

No one was injured during the incident. 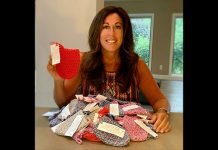