At the May 3 council meeting, Sgt. John Reiff, Ptl. Steven Ambrosino, Ptl. Victor Segoviano and Ptl. Aaron Owens were honored after aiding an unresponsive 14-year-old boy. When a first aid call was initiated, the police officers quickly arrived at the scene to find the boy not breathing and having no pulse.

Thanks to their life saving efforts and quick response, the boy that the officers saved was able to join them at the council meeting to honor them for their service.

“We were proud to honor several officers who went above and beyond during a couple calls for service,” the department wrote in a statement.

In addition, Sgt. Diego Flores, Ptl. Patrick Healey and Ptl. Brian Ruegger were honored at the meeting for responding to a report of smoke coming from a house. When they arrived, they found the home on fire and the resident trapped inside. Officers were able to save the resident as the home was engulfed in flames.

“These officers were able to grab the resident and literally pull him through a first floor window as access to the front door was covered with smoke and flames. The resident not only survived, he sustained no injuries,” the department wrote.

All seven offers were presented with a Life Saving Award by Chief of Police Craig Dispenza and Mayor Kevin A. Kane.

Also at the council meeting, Lt. Chris Colaner and Sgt. Nicholas Iozzi were promoted and publicly sworn in to their new posts. 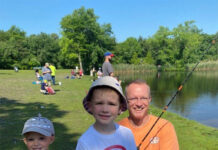