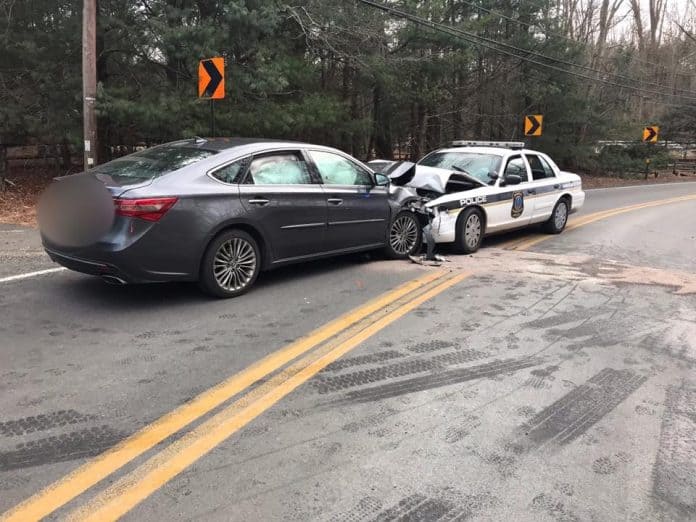 HOWELL – Police continue to probe the cause of a motor vehicle collision that injured a Howell man and a Howell Township Police Officer on Feb. 15.

At approximately 4:15 p.m. on Feb. 15, officers responded to the area of Manassa Road near Norse Road for an accident. Lawrence Cohen, 62, of Howell was traveling in a 2016 gray Toyota Avalon when he veered into the oncoming traffic lane and collided with Patrolman John Woolley’s Howell Township Police vehicle head on.

Cohen sustained minor injuries and a laceration to the face in the collision. Ptl. Woolley sustained a significant injury to his foot and lacerations to his face. Both men were transported to Jersey Shore University Medical Center. Ptl. Woolley was released on Feb. 16.

According to police, Cohen will be charged with Failure to Maintain a Lane at the very least. Cohen consented to having his blood drawn and toxicology test results are pending. No word yet on whether Cohen was impaired by drugs or alcohol in the crash.

Although police do not believe he was driving impaired, they stated that Cohen “could not explain why he crossed into the oncoming traffic lane” at the scene.

Anyone with any information is asked to contact Patrolman Matthew Cherney of the Howell Township Police Department’s Traffic Safety Unit at 732-938-4575, ext. 2629