HOWELL – Howell Township School District is one of many New Jersey school districts that are making major adjustments to accommodate the massive cuts to state aid.

This bill aims at decreasing aid provided to districts that are considered to be overfunded.

To make up for the loss, Howell School District has implemented additional revenue and reductions in certain appropriations, according to business administrator Ronald Sanasac.

The district will put $500,000 towards the loss from a maintenance reserve fund that was to be saved for future building improvements. Another $175,000 will come from additional revenue. Sanasac said that the remaining $238,973 will be accounted for by making small adjustments, such as decreasing appropriations for line items, like paper and printer usage.

Sanasac noted that under Murphy’s initial proposal announced back in March, Howell was slated to receive approximately $33.4 million for the new school year. This was more than they had expected, according to Sanasac, but it was not set it stone yet. The Board of Education subsequently drafted a budget totaling $123,835,263 which was presented in May.

At this time, the district had no idea exactly how much state aid they would be receiving until final state aid amounts were determined by June 30.

Come July, the district was informed they would be receiving approximately $32.63 million in aid, nearly $1 million less than they had planned for.

Sanasac stated that the cut amount was “significantly higher” than the district was expecting, almost double, due to these proposal changes over time.

At the July 25 Board meeting, officials announced where exactly the district would see cuts to accommodate for this change. Sanasac said that he aimed to be “as economical as possible…to economize each dollar on the operational side of things,” so that students are not affected by the financial loss.

Most importantly, there will be no major cuts to staff or programs, said Sanasac.

The state plan aims to cut approximately $10 million total over the next six years from the Howell district; $913,973 now, and increasingly larger cuts to state aid in increments each year. 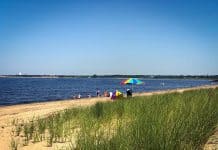 Monmouth County Urges Beachgoers To “Know Before You Go”