Echo Lake received a “new ADA (Americans With Disabilities Act) accessible sidewalk between both parking lots and the pavilion,” according to the township’s social media. Four new waste receptacles and a park bench were also added to the area.

According to Director of Community Development Jim Herrman, the township wanted to improve accessibility to link the north and south sides of the lake.

An ADA ramp was installed at the driveway, and the sidewalk was extended around the entire parking lot. The walkway around the informational signboard and its entrance were expanded to improve slopes and accessibility, he explained.

“Finally, we installed a new park bench, three recycling cans and one garbage can to supplement the existing benches and cans in the park. We thought the cans would be a nice addition as we were seeing the existing garbage cans overflowing on a routine basis,” Herrman said.

Noticing that a lot of this overflow showed recyclable material, Herrman decided that adding more recycling bins would be beneficial in more ways than one; to help residents “do the right thing” and to reduce the overflow of trash. It was also arranged at DPW will now pick up trash at the park three times per week instead of two.

“Hopefully the combination of the additional receptacles and more frequent pickups will solve the problem,” he added. 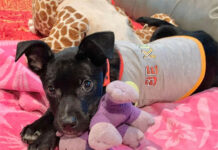