BRICK – A busy intersection is about to get even busier when a Wawa convenience store and gas station, retail pad and bank are constructed at the site of the Laurelton Mobile Home Park at the corner of Jack Martin Boulevard and Route 88.

The Board of Adjustment narrowly passed the application during a special meeting on August 9, which needed a yes vote from five of the seven members.

Initially, only four members voted for the application which meant it would have failed, but Board of Adjustment member Dawn Marie White, who initially voted against the application, quickly changed her mind and said she wanted to change her vote to a yes.

White said she changed her vote “based on what the law tells me to do. Traffic will be horrendous there, but if we vote no, it will get overturned,” she said.

Engineers and other professionals had previously presented their testimony, so most of the meeting was public comment.

About two dozen residents of Laurelton Heights, Midstreams and the mobile home park attended the special Board of Adjustment meeting, and many of them spoke out against the proposed development.

Cindy Shay, who is a retired emergency room nurse from Jersey Shore Medical Center, said that even a small change to that area results in more congestion.

“It impacts our pedestrian safety and children riding school buses because there’s no sidewalks and there are narrow lanes,” Shay said.

She said there are already two doctor’s offices, three strip malls and two roads on Route 88 opposite the proposed development. “It’s already dangerous to the residents – I don’t see this working when our biggest concern is safety,” Shay said. “This adds to the danger.”

Donna Bekefi said that when the traffic is factored in from new stores open in the old KMart plaza and from St. Dominic, State Highway 88 and county road Jack Martin Boulevard won’t be able to handle it.

“I really don’t feel this is going to work. Have any of you been on Route 88 in the last two years to see what the traffic is like? I don’t know how this is going to fit into our neighborhood,” Bekefi said.

Carol Renkel said hers is the first house across on Jack Martin Boulevard across from the proposed Wawa, and she said she was worried about the lights, traffic, noise, fumes and garbage.

“We don’t need another gas station. One of the other three in our neighborhood will go out of business and then we’ll have another empty gas station,” Renkel said.

Dorothy Sterk said she is concerned about some of the wildlife she has seen on the property of the mobile home park, including fox, deer, eagles and hawks.

“I’m very upset about it, this should be built someplace else where a business like that belongs,” she said.

Mobile home parks are allowed in the township under certain circumstances, which includes the pre-existing, age-restricted Laurelton Mobile Home Park.

A resident of the mobile home park said he estimates that there are 15 to 20 occupied homes there. As part of the development agreement, those homes would be relocated to the rear of the 12-acre site.

Board of Adjustment attorney Ron Cucciaro said the traffic patterns for the development was approved by the state and county, and Brick has zoned the site for business, so the plan fits within the township’s master plan.

He said the Board of Adjustment members are required to follow case law rule.

“We are the lowest level of government here,” Cucciaro said. “How the board votes is not a reflection of the very real concerns, but there are only certain things this board can look at,” he said.

“We have to play the hand we’re dealt, and the board has to vote pursuant to the law, and they have to stay within the bounds of what the law allows us to do,” the attorney said.

The attorney for JSM@Martin Blvd LLC, Douglas Wolfson, said the original application had a list of 17 variances which had been reduced to two on this application. Both variances relate to reducing the size of the mobile home park and creating an access road for the homes through the site.

The BOA attorney said the Board of Adjustment members could vote against the project if they found that the trailers being on a smaller piece of land creates a substantial detriment to the public.

“I’m not unsympathetic to the public,” Wolfson said. “We tried to accommodate their concerns.”

The two Board of Adjustment members who voted against the application were Louis Sorrentino and Stephen Leitner.

The developer of the Wawa project, JSM @ Martin Blvd., LLC originally had a daycare center as part of the plan, but it was eliminated after that proposal was rejected by the Board of Adjustment last June.

JSM is Jack and Sheryl Morris; Jack Morris is the president and chief executive officer of Edgewood Properties, and is a well-known developer in Brick who built the Costco shopping center and will be developing part of the vacant Foodtown site. 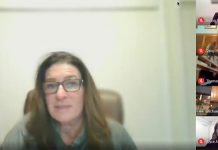