Lakewood Police Captain Gregory Staffordsmith told Jersey Shore Online that two men in a 2019 Chevy Suburban were injured in that early morning crash into a tree on County Line Road and Cedar Row.

Yechiel Yitzchak Finegold, 20, of Baltimore, was in the front passenger seat and sustained “grave injuries,” according to Staffordsmith. Finegold was taken to Monmouth Medical Center’s Southern Campus in Lakewood, where he succumbed to those injuries.

Staffordsmith said the investigation revealed that the Suburban “had come into contact” with a 2018 Nissan Sentra, which was traveling east on County Line Road. The driver, later identified as Mashon Wilson, 28, fled the scene. He and his vehicle were later located at his Lynn Court home.

Wilson was charged with leaving the scene of an accident with injuries, operating a motor vehicle while suspended and hindering his own apprehension. He was released on his own recognizance pending a court date.

Staffordsmith said the investigation is ongoing, and more charges may be filed. 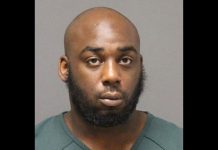