BRICK – Several residents living in the vicinity of the former Temple Beth Or at 200 Van Zile Road attended the most recent Township Council meeting to express their concerns about the site being used as an ultra-Orthodox Jewish high school for boys, and that nearby homes are being purchased and used as dormitories for the students.

The 4.1-acre site of the former synagogue was sold in March for $3.6 million to Lakewood Congregation Kehilos Yisroel (CKY).

On Friday, August 20, attorney Ronald Cucchiaro of the Weiner Law Group, which represents Brick, filed a lawsuit in Superior Court, Toms River, to ask the judge to force the unauthorized school to immediately cease and desist operations until all required land use approvals and uniform construction code permits are secured.

After receiving numerous complaints from neighbors that Congregation Kehilos Yisroel was using the building to operate a private high school for boys, the religious group has largely ignored warnings by the township that they must file permits for the change of use.

In previous interviews with this newspaper, township officials said there are a number of problems with a school operating in this manner. The school’s owner must go through the township when the use of the building is changed, in this instance from temple to school. Inspectors must also be allowed inside to check any work done to make sure it is safe for the new inhabitants. If electrical or construction work was done to create new classrooms, there weren’t any permits or inspections.

During the public comment portion of the council meeting, Joe Orth of Cleveland Avenue was the first to speak. He thanked the mayor and his team “for being so proactive and addressing the situation at 200 Van Zile.”

Orth said that he and his neighbors are concerned that 91 Hendrickson Avenue, a residential home located near the former temple, “is allegedly being used as a dormitory for the high school on Van Zile.” David Gluck purchased the home on May 10 for $419,000. Orth said that Gluck has also purchased 226 Van Zile Road.

“I think we’re seeing a story being written here, and it’s not good,” Orth said. “I’m just asking you to look into the situation – residential neighborhood dormitories, and realize that people are being affected every single day, and they’re frustrated…dormitories cannot be allowed to just spring up around grandma and grandpa, or next to a family with children in a residential neighborhood.”

“There are cars, day and night, coming and going into 91 Hendrickson – cars, vans, dropping off and picking up the men that live there, who also walk the streets all hours of the day and night,” she said.

Catalano said that the men do not seek to become part of the community, evidenced by the fact “that with knowledge and forethought, they sought to circumvent the rules that our community has established.”

The mayor and council did not comment on the residents’ concerns since land use approvals are heard before the township Planning Board and Board of Adjustment.

If the application goes before the Superior Court, any comments made by government officials can be construed as trying to affect the outcome of the case.

Attempts by this newspaper to speak to David Gluck or Congregation Kehilos Yisroel were unsuccessful.

The next council meeting will be on September 14 at 7 p.m. 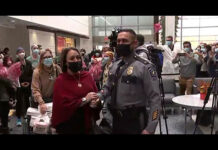 Police Officer Thanks Hospital For His COVID Care