BRICK – Thousands of Brick High School students interacted with Vivian D. Filippone over a period of 25 years when she served as a volunteer in the front office while her son Dennis served as its long-term principal.

Vivian, 90, passed away in her son’s home on November 14 after suffering with Alzheimer’s.

She was so beloved by the Brick High School students that they dedicated a yearbook to her one year.

“My mother was always focused on serving someone else,” Filippone said in a recent phone interview.

As a stay-at-home mother to Dennis and his twin brother, Steven, Vivian attended Ocean County College at night and earned her Licensed Practical Nurse certification, and then spent 25 years working as a labor and delivery nurse at Community Hospital.

Vivian quit her nursing position when her husband got sick.

“She was very consumed by that, because he needed a lot of attention,” Filippone said. His father was very sick for two years and eventually he had a heart transplant.

“When he passed away she didn’t have a focus, so I suggested that she come and volunteer at the high school – that would give her something to do,” Filippone recalled.

She started out just one day a week in the front office, greeting people, signing in substitute teachers, signing students in and out – that sort of thing, he said.

“After about a month, I noticed she started coming in five days a week,” Filippone said. “She started doing everything a secretary does, and she even got her own desk – she became part of the staff.”

Mr. Filippone said his mother only missed one day in 13 years, including the summer months.

“She was never sick, she loved coming in,” he said. “The staff, and especially the kids, loved her because that became her purpose in life until her grandchildren came.”

After serving as principal for 14 years, Filippone moved to central administration, but his mother continued volunteering at the high school. “I thought she would stop coming in, but that’s when I realized it wasn’t me she was coming to see,” he joked.

There came a point in time when his mother was no longer able to drive, so the high school secretaries created a carpool and took turns picking her up.

When the Brick High School Football team won the state championship in 2016, the football players each got a ring. The players had the ring replicated as a pendant created for Vivian. She wore it all the time, her son said.

Vivian was also accepted into the Brick High School Hall of Fame.

The current Brick High School principal, William Kleissler, was the assistant principal when Vivian worked in the front office.

“She was the best volunteer we’ve ever had in the Brick schools,” Kleissler said in a recent phone interview. “She volunteered every single day, and she was part of the fabric of the school community. She immersed herself in everything that was part of the student body.”

Kleissler said that Vivian attended all the after-school events and games.

“She was a fan of everything that was Brick High School,” he said. “She reached out to the kids, and she really had an impact. When the kids graduated they would come back and ask about her as they would their favorite teacher or coach.”

She only stopped volunteering at the high school when she was 87. She fell at home and suffered a serious arm fracture.

“Alzheimer’s is a terrible disease,” Mr. Filippone said. “She had an incredibly strong body – she never even took a pill. Then she broke her hip and had a long surgery, and she was never herself again. Her brain stopped telling her body how to function, her kidneys shut down and she went very peacefully in her sleep.”

Mr. Filippone and his brother have started the Vivian D. Filippone Scholarship Fund in memory of their mother. They hope to award one or two scholarships a year to a Brick High School student who wants to attend the nursing program at Ocean County College or to a football player.

If you would like to donate to the fund, checks may be sent to: 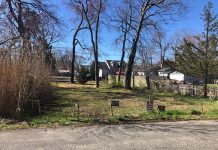 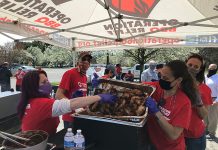 Comfort Food Provides Relief For Those In Need