BRICK – A man was injured after a crash left his vehicle leaning vertically against a utility pole on Saturday, police said.

On May 11, at approximately 8:30 p.m., a delivery driver was traveling on Manor Drive near Western Lane when he veered off the road and into the guide wire attached to a utility pole. The vehicle then traveled up the guide wire until it was leaning vertical.

The driver sustained some minor injuries when he opened the door of the vehicle and fell out, according to police. He was later transported to Ocean Medical Center for treatment.

Members of the Brick Fire Department responded to remove the vehicle from the guide wire. 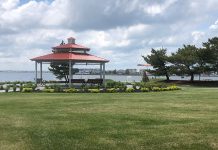 SummerFest Ready To Take The Stage

Brick Applies For Grant To Pay For Roadwork