BRICK – The Township will be the beneficiary of some $7.5 million in funding from the American Rescue Plan (ARP), the $1.9 trillion COVID relief bill approved by Congress and signed into law by President Biden in March. In addition, Ocean County would receive approximately $117.7 million of the funds.

Mayor John G. Ducey said he is happy that Brick would be getting the money, but said the bill has “an odd restriction” that the money cannot be used for tax relief.

“That is something I would love to use it for,” the mayor said in a recent phone call. “That was in the press release that was done – it said what every town was going to get, and that one of the conditions was that it cannot be used for property tax relief.”

The press release also said that no ARP funds may be used to fund pensions.

An estimated $10.2 billion is earmarked for New Jersey, which includes about $6.4 billion for the state, $192 million for broadband, $1.8 billion combined for all 21 counties, and $1.7 billion split among all 565 municipalities.

While there has been little guidance on how the ARP funds may be used, some broadly stated permitted uses of state and local aid include necessary investments in water, sewer or broadband infrastructure.

The funds may be used to respond to negative economic impacts resulting from COVID, including assistance to households, small businesses and nonprofits. The money may also be used to aid impacted industries such as tourism, travel and hospitality.

ARP state and local aid may be transferred to a private nonprofit organization or a public benefit corporation involved in the transportation of passengers or cargo or a special purpose unit of state or local government.

Mayor Ducey said funding is always needed for infrastructure, such as for roads and roadway elevations to help with flooding, and similar projects, which is always one of the township’s biggest expenses.

Brick Township CFO Maureen Laffery-Berg said she’s had Zoom calls about the spending bill, including one with The United States Conference of Mayors.

“They’re still working out the kinks,” she said in a recent phone call. “The rules and decisions are being made now, and they’re thinking by the end of May they will have guidelines as to what they can tell us what the funds may be used for.”

She took part in a webinar that was designed to get input from different communities on how to spend and use the funds.

In New Jersey, 3,691,546 eligible households would receive $9.62 billion of the American Rescue Plan in direct payments, or an average of $2,605 per household.

Local governments would be required to provide periodic reports detailing how the funds were used. Violating any provision of the bill would result in repayment to the U.S. Treasury an equal amount to the funds used in violation. 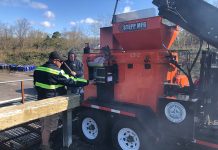