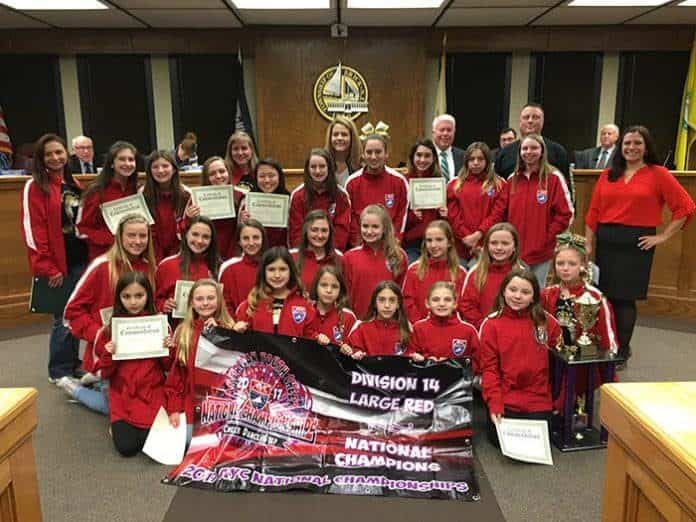 BRICK – The governing body passed a resolution to oppose offshore oil and gas drilling after the Jan. 8, 2018 announcement by the federal Bureau of Ocean Energy Management of a draft proposed program for the 2019-2024 Outer Continental Shelf Oil and Gas Leasing Program.

“This resolution confirms the township’s strong opposition to offshore oil and gas development in the high likelihood of a substantial environmental impact on our beautiful ocean,” said Mayor John G. Ducey.

“It represents a historic threat to the entire Atlantic Ocean, from Maine to Florida, including the waters off of New Jersey as close as three miles to ocean beaches…anything can happen,” he said. “We’re strongly opposing that New Jersey’s waters be used for this purpose at all.”

The first ordinance is for the acceptance of a property donation on the recommendation of the township Land Use Committee. Block 224.14 Lot 14, located in the Mandalay Road area, was in the same family since the 1930s, and is wetlands, said Council President Heather deJong, and would qualify for CRS (Community Rating System which helps to reduce flood insurance premium rates) points.

The second ordinance amends the construction fees for elevator inspections. The state changed the way municipalities inspect elevators. A new revision calls for the elimination of six-month, semi-annual inspections of elevators, leaving the annual inspection as well as the five-year load test, she said. Escalators would still have the six-month inspection requirement.

“The township must re-adjust the fee schedule by adding a re-inspection fee, eliminating the six-month fee and adjusting the five year load test fee,” she explained.

The third ordinance approved the recommendation of the township Land Use Committee to update the fees for fire safety reviews for the Board of Adjustment and Planning Board.

Ducey said that he had received a 2017 Meals on Wheels report from the township Senior Outreach Services. The program, which provides hot meals to seniors, provided 33,268 meals to 280 Brick residents last year.

Council President Heather deJong said that Senior Outreach Services is offering free tax preparation for seniors at their headquarters at the Veterans of Foreign Wars on Adamston Road. Seniors must call for an appointment at 732-920-8686.

Councilman Jim Fozman reported that the amount of single stream recycling for 2017 was 8,681 tons, which saved the township some $625,363 in tipping fees at the Ocean County Landfill in Manchester.

Fozman said that on Saturday, May 12, household construction materials would be accepted from Brick residents at the recycling center on Ridge Road. Residents must supply their tax bill and driver’s license, and no commercial vehicles would be allowed.