BRICK – Acting Superintendent of Schools Sean Cranston read prepared comments during a recent Board of Education meeting about the October 22 shooting that occurred near Brick Memorial High School after school let out.

(A 16-year old student who sustained a shoulder injury was not the intended victim, Brick Police Chief James Riccio said days after the event).

“It created a highly sensitive and stressful situation for our students, our parents, and our staff,” Cranston said. “The protocols that were enacted enabled us to coordinate an organized, orderly and efficient response.”

Cranston thanked the school staff, police department and township government for coming together and anticipating the needs of the students, their families and staff as the situation evolved and eventually resolved when an individual was arrested.

“I am proud to represent a district with such a highly professional staff who are committed to the well-being of our students,” he said. “At each school building, our staff demonstrated an impressive level of emergency preparedness, coupled with sensitivity and support for our students and families.”

Director of Planning, Research and Evaluation Susan McNamara explained the timeline of the shooting.

McNamara said the student who opened the door did so to aid their friend who was injured, which she said was an empathetic thing that “just about any child would do if they saw their friend was injured.”

The school was not yet in lockdown when the injured student was allowed back into the school, she added. The school went into lockdown as soon as they found out why the child was in the building.

During public comment resident Raymond Mann said he came to the meeting to discuss the October 22 event and thanked Cranston for “opening the door for me…for a couple of personal things that would be nice to share.”

His son, who is a freshman and a member of the cross-country team at Brick Memorial High School, was out by the bleachers with his teammates getting ready for practice when “things began to happen,” Mann said.

His son called him to say there was a possible shooting near the school and the team was going back into the building for a lockdown. Mann said a feeling of “helplessness and hopelessness came over me.”

Mann, who is a teacher in the Lakewood district, said he has practiced lockdowns, shelter in place and active shooter drills “countless times over the past 19 years, but I never thought that my son…would have to experience an actual real-life event like they did last month.”

He said he wanted to personally thank the faculty and staff at the high school and at Veterans Memorial Middle School and the police officers that assisted in the event.

“I felt the response during and after the incident was done to the best of the ability of all involved, but I also like to thank my son’s cross-country coach, Mr. (Paul) Roebuck, the girls’ cross country coach, Mr. (Patrick) O’Donnell, the principal, Mr. (Jonathan) Barresi, and Mr. and Mrs. Fitzpatrick, all of whom were with the students while they were on lockdown in the auditorium,” Mann said.  “Thank you for keeping our children safe and calm during such a chaotic event.”

Also during public comment, the mother of a Lanes Mill Elementary School student told the board members she was shocked when she found out about the shooting, and said she is concerned about gang activity at the high school.

“Is there any investigation going on with that?” she asked. “Does the school investigate these things?”

Board Attorney Ben Montenegro said the administration can’t comment on any particular student, but said the police are fully involved in everything that took place.

McNamara said the district is confident that police efforts will “result in a conclusion with which everyone will be satisfied.”

Since the shooting, the township police department has made some 40 arrests, mostly for drug and shoplifting charges.

The next Board of Education meeting will be on Thursday December 12 at 7:00 p.m. at Brick High School. 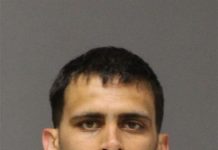