BRICK – Township residents would be able to use recreational marijuana if New Jersey becomes the 12th state to legalize the drug, but they will have to buy it elsewhere since the governing body passed an ordinance on March 13 that bans the sale, cultivation, manufacturing and testing of marijuana here.

There was a heavy police presence during the meeting as members of the audience on both sides of the issue made their case in favor or against the ordinance.

Those who spoke in favor of banning marijuana in Brick were largely from the Adamston Road neighborhood surrounding a 6.7-acre site of a former OceanFirst Bank where Jersey Shore Therapeutic Health Care (JSTHC) hoped to open a grow house and a dispensary.

Their chief executive officer, Brick attorney Anne Davis, recently changed the application to remove sales from the plan and use the land for cultivation only in a proposed 48,000 square foot grow house.

Before the council members voted on the final reading of the ordinance, township attorney Kevin Starkey said that the current bill being considered by the state legislature to allow recreational marijuana has wide-ranging zoning implications for towns that do not ban the drug.

Without a ban in place, the state requires that a town allow growing, cultivating, processing and selling of marijuana in all industrial zones of the township and to allow the retail selling (dispensaries) in all commercial and retail zones, Starkey said.

“It is unusual for state legislation,” he said. “The practical effect of that is, if this bill is approved, and there is not a ban in Brick, you are actually going to lose your power to zone, especially for retail dispensaries…it’s a tremendous incursion by the state into what is traditionally local zoning power.”

Using estimated projections of marijuana sales in the state, and the number of towns that will ban the sale, Mayor John G. Ducey said the township stands to gain only about $75,000 in tax revenue from the sale of recreational marijuana, or about .007 percent of Brick’s $100 million budget.

The senate bill requires townships to collect the tax revenue monthly, which would require manpower, and a police escort would probably be needed since it would be cash, Ducey said.

The governing body voted unanimously for the ban (Councilwoman Marianna Pontoriero was absent), and Councilman Jim Fozman asked the mayor and the council to send a resolution to Governor Phil Murphy, Senate President Steve Sweeney and Assembly President Craig Coughlin opposing the sale of recreational marijuana in the state.

Councilwoman Heather deJong said it’s still a “huge if” if the state is going to pass the legalization of marijuana.

“It’s not a lot of money we would be getting in,” she said. “If we were to do this, it wouldn’t make any financial sense because of the monitoring, collection and administration costs, and all the zoning issues.”

Council Vice President Lisa Crate said that if the state allows the sale of recreational marijuana, Brick residents having to drive one town over to purchase marijuana “is not an injustice, it’s an inconvenience,” and the noted the lack of benefits the bill offers to towns.

Councilman Art Halloran said he is not against medical marijuana and “recreational probably isn’t all that bad, either…I don’t think fiscally this would be responsible to not pass this, I vote yes on the ban. I think it’s the right thing for Brick Township,” he said.

Council President Andrea Zapcic said she read all 163 pages of the senate bill and learned that any town not banning the sale of recreational marijuana is automatically “in” for five years.

“After five years if you decide to opt out, the businesses that have come in in those five years are grandfathered,” she said.

While the state stands to make about $210 million in tax revenue, none of that is earmarked for Brick schools, local law enforcement or “anything that we need,” she said.

She said the bill was “written by the cannabis industry for the benefit the cannabis industry” because of the 12 states that have legalized marijuana, “New Jersey is the only state that does not allow home-grown….every other state allowed a small number of plants for people to grow for their own consumption, but New Jersey scratched that out,” Zapcic said.

The next council meeting will be on Tuesday March 26 at 7 p.m. 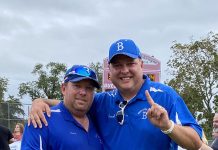