“It is an unbelievable feeling, it is still surreal,” Basile said in a press release. “This is the team I grew up watching and loving. To just be able to put on a Giants uniform is a great feeling and an honor.”

He will reportedly wear the uniform in tomorrow’s preseason opener. The Giants play the Cleveland Browns at 7 p.m., available on NBC and on the NFL Network.

In April, Basile was called up to the Indianapolis Colts as an undrafted free agent. But then this week he received a phone call offering the opportunity to try out for the Giants.

“It was crazy I got a call last night from them, I packed up all my stuff went up to the hotel. I worked out for the staff this morning and after the workout, Coach Bettcher (Giants Defensive Coordinator James Bettcher) came up and said congratulations,” he said.

Basile, a safety, graduated as the most decorated player in Monmouth history, earning consensus All-American honors as a junior and senior.

He set the Monmouth record for career tackles with 433 last fall and finished as a four-time first-team All-Big South Conference selection, setting the conference record for solo stops with 285. The 2017 Big South Co-Defensive Player of the Year was named to the FCS ADA All-America Team earning the distinction of the top defensive back in the FCS.

Basile played safety and running back at Brick Memorial under coach Walt Currie. Basile helped the Mustangs to the NJSIAA playoffs in each of his three varsity seasons, including 2013 when they were 6-4. He made 18 tackles in their Central Jersey Group IV playoff game against Manalapan.

Basile notched 88 tackles, broke up 10 passes, forced one fumble and recovered three fumbles as a Brick Memorial senior. He added 540 rushing yards and 184 receiving yards as a senior with the Mustangs.

He also starred as a junior, putting 82 tackles, 4 1/2 sacks and four forced fumbles into the book. He added 612 yards on 54 carries and 510 receiving yards. He scored 15 total touchdowns. 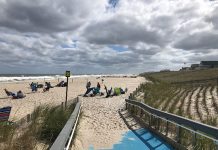