BRICK – Season beach badges are still available for purchase, but day badges are being limited to 25 a day for Brick Beaches 1, 2 and 3 for a total of 75 day badges, said Director of Recreation Dan Santaniello. Day badges for Windward Beach are also limited to 25, he added.

“When we started selling the season badges on June 1 in our Recreation office, they were a hot commodity,” he said.

Word had gotten out that there would be a limit on beach badge sales, so for two and a half weeks the Recreation staff “couldn’t breathe,” he said. “There wasn’t 10 seconds the phone didn’t ring.”

As a comparison, by last year at this time, 5,777 season badges had been sold. This year, the department has already sold 8,011.

Sales have slowed down to about 100 season badges a day, which may only be purchased at Brick Beaches 1 and 3, and at Windward Beach.

Despite the uptick in season badge sales, overall beach revenue might be down a little because in the past, daily badge sales for the ocean beaches averaged around 300 a day, he said.

Lifeguards ensure that beach goers are socially distancing to comply with coronavirus mandates. So far, beaches have reached their capacity only on weekends, Santaniello said.

When long-time Beach Captain Donovan Brown, Beach Lieutenants FJ Lucchetti and Robbie Brown (who are both high school teachers in Brick), and a barrier island-based Brick police lieutenant make the determination that social distancing can’t be met, they immediately send out a Nixle alert, Santaniello said.

Usually when the 25 daily badges per beach are sold, social distancing can’t be met as determined from the lifeguard stands, he said.

“We thought about numbers, about using a clicker, but that would be too hard because people go back and forth to use the restrooms and snack stand, and people walk over from private beaches,” Santaniello said.

When the Nixle alert goes out, there is a rush on Windward Beach within the hour, he said.

Daily badges usually become available again around 2 p.m. when the beach starts thinning out, he added.

“Things have been running a lot smoother than I thought they would – people are accepting and understanding of the circumstances when we close the gates due to overcrowding,” he said.

Five mornings a week at around 4:30 a.m., Donovan Brown rakes the beaches, and Santaniello takes over on the two days Brown is off.

Lifeguards socially-distance by one sitting on the top of the stand and one sitting below unless the beach is crowded, Santaniello said.

“When it’s crowded, both of the lifeguards sit up on the stand,” he said. “Otherwise, we’re setting ourselves up for failure.”

All beach employees had physicals before the season started and they have their temperature checked every day when they clock in by an EMT who is stationed at Brick Beach 1.

In other Recreation Department news, registration for summer camp will begin on July 3. Camp will be held from August 3 through August 28 for children ages 5-13.

The enrollment will be limited to 200 kids, down from 500 in the past in order to keep them socially-distancing, Santaniello said.

Camp for 50 kids, ages 5-8 will be held at Windward Beach. Three of the township’s rebuilt parks – Bernie Cooke, Lake Riviera and Birchwood – would be utilized for 150 kids ages 9-13, or 50 at each park, Santaniello said.

Kids would rotate to a second park, so they’ll get to use two out of three, he said.

There will be no field trips this year, Santaniello said. “But the kids will still have a good time,” he added. 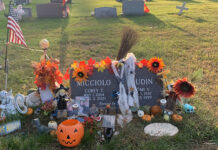