ASBURY PARK – A Brick man is still on the loose after evading capture by Asbury Park Police.

Aamir Morris, 20, is wanted for unlawful possession of a weapon and prohibited weapons, aggravated assault, and resisting arrest.

Around 5:44 p.m. Dec. 5, Asbury Park Police investigated a vehicle on the 1400 Block of Mattison Avenue. Morris and three other occupants were in that car. While all four were exiting the car, Morris reached for and pointed a firearm at the officer nearest to him. After a brief struggle, the Brick man was disarmed and the weapon knocked to the ground.

Morris fled on foot and has not been located since. He is considered armed and dangerous.

The three other occupants—Imirrah Bouie, 20, of Asbury Park, Nailah Hines, 19, of Neptune City, and Cameren Cowart, 20, of Neptune—were taken into custody.

“The officers involved in these arrests showed great bravery and professionalism removing these armed and dangerous persons from the streets of Asbury Park. It is truly a great honor and privilege to work with officers of this quality. They displayed determination and courage and put their own lives at risk to ensure the safety of the residents of the City of Asbury Park and the surrounding community,” Chief David Kelso said.

Anyone with information on the whereabouts of Aamir Morris is asked to contact the Asbury Park Police at 732-774-1300. 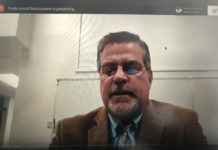 Remote Learning – And Remote Board Meetings – For Brick Schools