BRICK – Township schools are “significantly safer” since the Feb. 14, 2017 Parkland, Florida school shooting that resulted in the death of 14 students and three staff members, said school administrator Dennis Filippone during the August Board of Education meeting, but much more needs to be done to increase the protection of the students, staff and facilities here.

To that end, residents will be asked to vote yes on a $12,580,000 school security referendum, which will be on the ballot at the general election in November.

Filippone said on the morning after the Parkland shooting, Mayor John G. Ducey called for a meeting between school administrators and the police to come up with a plan.

“We brought in a gentleman, Dale Yeager of Seraph, based in Washington D.C., who developed a comprehensive safety audit for the school district,” Filippone said.

That document cannot be made public since it shows the vulnerabilities of the schools, he said.

“The referendum was not done haphazardly,” said Filippone, the director of planning, research and evaluation for the district.

“We got input from each principal and their administrative team to get their ideas. We got lots of input from lots of stakeholders,” he said, and the renovations would be different in each school.

Much of the funding would be directed toward securing the front entrances that would create secure vestibules, where a visitor would check in via a window into the main office before they would be allowed into the building.

Renovations would be different in each school, based on the present location of the main office.

In some schools, the main office would have to be relocated to an existing classroom so that it is located at the front entrance. 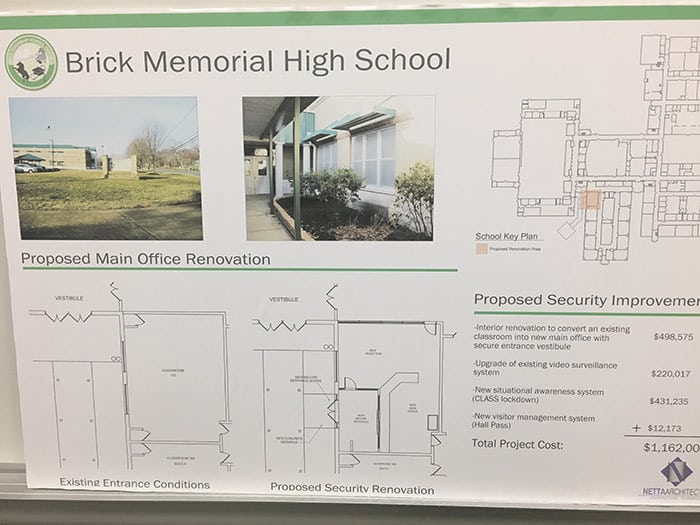 There would be one school security drill each month with a minimum of two each for an active shooter; an evacuation; a bomb threat; and a lockdown, Riccio said.

“The safety of our children is paramount,” the police chief said. “For years, the police department has been working with the school system to practice for events like Parkland.”

Events like Parkland happen when there are three things, Riccio said: mental illness, weapons and victims.

“Remove any of these components and there is not a problem,” he said.

Since the Florida shooting, Brick has had a 100-fold increase in police presence in the schools, and Riccio said his department brought in a psychiatrist to educate police and school faculty to learn about what kind of behavior to look for in a potential shooter.

“These schools were built before we had to worry about things like this, killing children,” Riccio said. “We need to bring these buildings up to code to protect children.”

The referendum would fund software for each police officer to see the layout of every school building and the location of any other officers. Riccio said this year he wants police officers to familiarize themselves with every school.

The security plan calls for software that would allow police detectives to monitor social media and look for words like “gun,” “shoot,” or “kill,” and look for anyone who is acting bizarre, he said.

Other security enhancements include upgrades to security cameras, and software that could instantly check visitor’s driver’s licenses for a criminal background.

There are currently seven armed retired police officers in the schools, and Riccio said he would like to hire additional Special 3 retired officers so there is “an experienced armed guard in every school.”

Resident Madeline Iannarone asked what would happen if the referendum fails.

“Is there money anywhere that can be used? Like grants and loans that would not increase taxes?” she asked.

Board President Stephanie Wohlrab said the district is applying for multiple grants, “but we don’t have $12.5 million in the budget that we could just pull out.”

The next Board of Education meeting will be on Thursday, Sept. 13 at 7 p.m. at the Brick Professional Development Center at the Veterans Complex.