BEACHWOOD – If you’re getting in the ring with Chris “Sandman” Thomas, make sure you’ve got your head on straight.

The local up-and-coming boxer’s current record is 15-1-1. If you want to know why they call him “Sandman,” it’s because 10 of those victories were knockouts. The last two knockouts were in the first round. He won the NJ Middleweight and USBF Light Heavy titles.

When asked how much of the fight is mental versus physical, he said its 60 percent mental.

“You can win or lose a fight before you even get in the ring,” Thomas said. Sometimes, he’ll know all he needs to know about an opponent before the first punch is thrown. When the two boxers face off, and stare each other down before the match, he can tell just by his opponent’s eyes what kind of fight it’s going to be. If his opponent’s head isn’t in the game, he can’t win.

He’s been doing this a while – since before he was even a teenager. His parents were trying to find a sport to get him involved in.

“I had never played a sport in my life,” he said. “I saw boxing and got bit by the bug.”

Ever since he was 12, he was an amateur boxer. He went pro in his senior year of high school.

People’s perception of boxing is much different than reality, he said. People get a lot of their ideas from movies. And of course, there’s one movie that everyone knows.

“Rocky’s a cartoon,” he said, laughing. Boxing movies like that are fun to watch, but not a very accurate representation of the sport.

He is joining the elite group of hometown athletes doing well, like baseball player Todd Frazier, mixed martial artist Frankie “The Answer” Edgar or football player Tymere Berry, all of whom came up through the Toms River schools.

“We were all the guys walking around high school saying ‘We’re going to be someone’ and everyone else was like ‘yeah, right,’” he said. Well, look at them now.

His roots in the community are still pretty deep. He’s lived in Beachwood since he was 8, and went to Beachwood Elementary School and Intermediate South and High School South. He’s managed and trained by Shawn Darling out of Gladiator Gym in Forked River. When he’s not there, he drives a beer truck for Shore Point Distributors out of Freehold.

Since his matches have been on ESPN and Comcast Sports, he’s starting to get noticed.

“I’ll be out and someone will ask to take a picture with me and I’m like ‘People know who I am?’”

If his career keeps up this trajectory, then yes, people will definitely know who he is.

His next fight is tentatively scheduled for April 4 at the Showboat in Atlantic City. 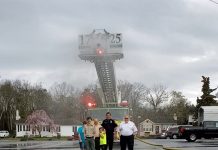