BEACHWOOD – A volunteer youth team leader at Saint Barnabas Catholic Church in Bayville was arrested this morning and charged with possession of child pornography, police said, noting that at this time there is no evidence that any of the children at the church were at risk.

Anthony Mauro, 45, of Beachwood, was charged with one count of 3rd degree Possession of Child Pornography and one count of 2nd degree Distribution.

The Ocean County Prosecutor’s Office reported that its High Tech Crime division had evidence that someone in the county had downloaded images of prepubescent children engaged in sexual acts. A month-long investigation led them to 537 Compass Ave. in Beachwood. A search of computers on the property found more than 100 images and movies.

According to the Prosecutor’s Office, Mauro was a volunteer Youth Team Leader with Saint Barnabas Catholic Church in Bayville. There has not yet been any evidence that children at the church were ever at risk, a spokesman said.

Beachwood police and the U.S. Immigration and Custom Enforcement’s Homeland Security Investigations contributed in the arrest.

The prosecutor’s office is urging anyone with information or concerns about the case to call Detective Kaitlin Mantle at 732-929-2027 ext. 2740. The conversation will be confidential. 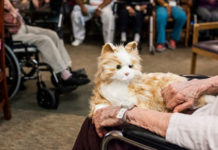