TOMS RIVER – Trucks hauling sand continued to line Oceanfront in Ortley Beach January 31, as crews dumped emergency sand into place on the beach. The emergency contract with Cardinal construction began January 26, in response to erosion from the Nor’easter January 23.

Officials said about 80 percent of the dunes were washed away in the storm. The loading area for trucks was just south of the old Surf Club property. Last year, Toms River township secured some state funding to offset the cost of the 2016 nor’easter season, which topped $1 million in sand, and officials pledged to work with the state Department of Environmental Protection for funding to reimburse this year’s project. 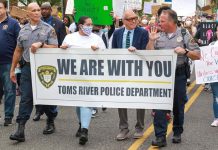