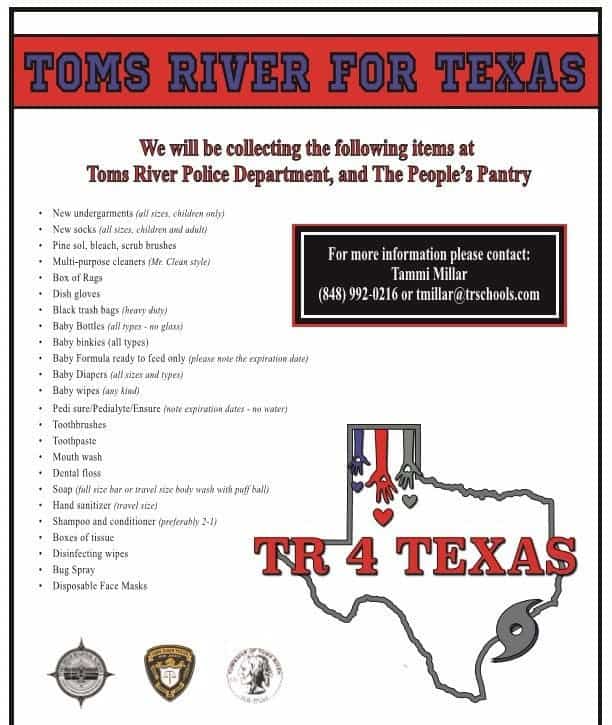 TOMS RIVER – As the five-year anniversary of Superstorm Sandy approaches in October, Toms River Regional Schools is doing their part to help out victims of Hurricane Harvey, the storm that has ravaged Southeast Texas and displaced thousands of people from their homes.

Using the theme “From One Community To Another,” the district is hosting a Jeans Day on Friday, September 15, where school staff and district administrators will take a break from their usual business attire and wear jeans for a $5 donation.

All proceeds will go to the United Way of Greater Houston’s Relief Fund.

A Toms River for Texas food drive has also been organized, and community members are encouraged to donate items of need to Texas residents and drop them off to the Toms River Police Department or The People’s Pantry.

In October, Toms River Schools will start its month-long NEA Big Read literacy program, based on a grant it received from National Endowment for the Arts. Students will read and study the post-apocalyptic novel Station Eleven, making connections back to Superstorm Sandy. Some of the money from events held to promote the Big Read program, which was originally being solicited for the Ocean County Long Term Recovery Group, will be donated to Hurricane Harvey relief efforts in Southeast Texas.

“Toms River residents who experienced the devastation of Sandy know all too well what folks in Texas are experiencing,” said Superintendent David Healy. “For all of its destruction and havoc, Sandy proved that no one responds better in crisis than the Toms River community, and we feel it’s our duty to join together and support our friends in Texas who are having their lives turned upside down by Hurricane Harvey.”

To donate to the United Way of Greater Houston’s Relief Fund, visit unitedwayhouston.org/flood/flood-donation.

For more information about the Toms River for Texas food drive, contact Tammi Millar at 848-992-0216 or tmillar@trschools.com.