TOMS RIVER – The governing body is restructuring its legal department. While most of the governing body are expecting a savings, one councilman is concerned how the new position will be appointed.

The township currently has a legal department with full-time employees. This change would contract a firm to do the work.

Councilman Daniel Rodrick was the sole dissenting vote on this. He saw it as a way to reward political allies.

He noted how local attorney Gregory McGuckin has picked up the legal duties in a few nearby towns, specifically his firm Dasti, Murphy, McGuckin, Ulaky, Koutsouris & Connors. McGuckin is a former councilman in Toms River, and is currently a member of the State Assembly. Rodrick suspected McGuckin would be the choice. McGuckin headed up Hill’s transition team after Hill won the mayoral race last year.

“All of these contracts should be open and fair,” Rodrick said.

Employees are retiring and won’t be replaced, he said. They are looking at a savings of a few hundred thousand dollars.

Hill said he spoke to other towns of similar size, like Lakewood, Brick and Berkeley and they’ve all saved $300,000 or more for doing the same thing.

“This was one of his big platforms” when Rodrick ran for office previously, Hill said. 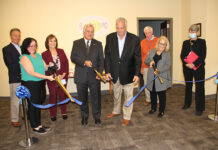