Officers were dispatched to a serious motorcycle crash around 7:10 p.m. on September 5 at

the intersection of Route 37 and Clifton Avenue.

As a result, he was airlifted to Jersey Shore Medical Center for treatment of serious injuries. During the course of the investigation, Carpenter was believed to be impaired at the time of the crash and was subsequently arrested.

He was listed in stable condition. The crash remains under investigation by Toms River Traffic Safety Officer PJ Gambardella.

At approximately 12:45 a.m. on September 8, township police responded to Route 37 near the intersection of St. Catherine Boulevard for a motor vehicle crash. Michael Marsh, 38 of Brick, was traveling Eastbound on Route when he attempted to make a right turn onto St. Catherine to travel south. Prior to making the turn, he struck the right curb, went up onto the grass and struck a “U-Left turn” and “St. Catherin North and South” street sign.

Marsh continued east through the grass striking a traffic light stanchion and then struck Utility Pole causing to pole to snap at the base. He then started moving south onto St. Catherine and came to rest on a utility pole guide wire.

He was found to be under the influence and was subsequently arrested. Marsh did not report any injuries sustained during the crash. He was charged with possession of hypodermic needles and issued multiple motor vehicle summonses.

Marsh’s vehicle was impounded as per John’s Law.

Later in the day around 8:15 p.m. police units were dispatched to the intersection of Route 37 and Coolidge Avenue for a pedestrian who was struck by a passing vehicle. The driver, Gerald Ring, 78 of Toms River, was entering the Route 37 eastbound jug handle to Coolidge Avenue northbound when he struck a pedestrian with his 2005 Toyota Camry.

Pedestrian Thomas Wisniewski 64, of Hammonton, was running across Route 37 from north to south when he was struck by Ring’s vehicle and thrown to the pavement.

Wisniewski was alert and conscious when officers arrived. He was flown to Jersey Shore Medical Center where he is reported to be in stable condition.

Ring was not injured in the accident and there were no signs of impairment for either the driver or the pedestrian. The accident is being investigated by Toms River Traffic Safety Officer Mark Nater. 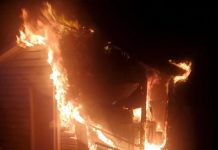