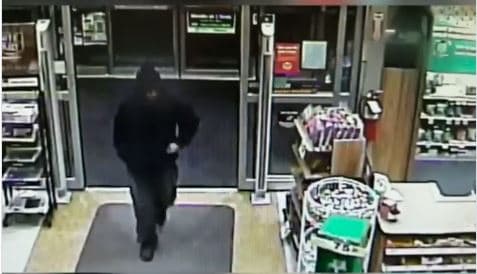 TOMS RIVER – Police are seeking the public’s help to identify a male who was seen brandishing weapons while attempting to rob local stores.

The man was caught on surveillance footage entering the 7-11 at Route 37 and Oak Ridge Parkway on March 28 at 1:40 a.m. The man allegedly pulled out a knife and demanded money before fleeing the scene. The same man was also seen entering the Rite Aid on Route 70 near Whitesville Road a few hours later at 5:59 a.m. There, he also brandished a knife, demanded money, and fled on foot.

Police ask that anyone in the area with surveillance cameras check their footage to see if this man or any suspicious vehicles were observed during this time. Anyone with information should contact Detective James Carey at 732-349-0150 ext. 1292 or at jcarey@trpolice.org.