TOMS RIVER – Halloween is a little bit different in Toms River Township. You don’t trick or treat on Oct. 31, that is done a day before. In this community, you enjoy the largest Halloween Parade in the state and the second largest in the world.

Without fail, the Toms River Fire Company No. 1’s 79th annual Halloween Parade prowled the street on Halloween night with an estimated crowd of 6,000 participants and as many as 10,000 parade watchers.
Before the parade stepped off however, hundreds of people were busy registering at the Toms River Fire Company firehouse from 8 am to 4 pm. There was no registration fee but donations to the fire company were welcomed.

The parade is so popular that people start to line up their spectator spots as early as 12 hours prior.

Resident Jill Anderson of Park Street is one such person. She was putting out her chair on Main Street around 12:30 pm. “I was surprised to find this spot not taken. I moved here in 1996 and I remember when people would put out their chairs along Main and Washington streets two days before the parade. The township didn’t approve of that and threatened to confiscate the chairs if they found them there that early. I think it’s great including the high school kids that are out there now painting the businesses’ windows.” Anderson referred to the annual program that involved students painting Halloween murals on downtown buildings.

At the same time, Kevin Bradshaw was preparing his family viewing spot across the street. “I usually do this much earlier. I’ve been coming here since I was a kid. Now I have a 5-month-old of my own. I’ll be here with my wife, in-laws and my new daughter. It is the one time out of the year that everyone comes out together to celebrate. It is nice that we all come together as a community.”

A little further down the street Dana Simone was also staking out her spot. “This is actually my second spot as my family is one of three families that come together for this. We’ll have 12 adults and eight kids. The kids will be dressed up in costume. I grew up in Toms River and I live a block away. We love the festivities, the spirit and it gets bigger and better each year. My kids love the steam train each year.”

Simone’s husband Gary is a first lieutenant in the Toms River Volunteer Fire Company No. 1 and arranges the bands that participate in the parade.

Decorated vehicles, costumed pets (including a pig), floats and various costumed groups and individuals made the annual event as popular as ever. The best family pet category was a new division for judging this year. Pets walked on a leash and those who got ride in a float were part of the fun.

Johanna Padluck of Holiday City Care Free in Toms River enjoyed her first Halloween Parade at the age of 90. She joined her daughter Dianne and friend Eda Matela of Cherry Hill.

”We’ve heard so much about this parade. This looks great. Mom even has her special magic wand and tiara,” Dianne Padluck said.

The fire company’s non-profit parade is a tradition that began on Oct. 31, 1919 with a group of township veterans who served in World War I. Approximately 500 participants marched in it. A block party followed the parade and was held along Robins and Water Streets. The fun included dancing, children’s games, cider and donuts. Decades later during the 1950’s, the party portion of it relocated to a parking lot, on grounds that are now the Toms River Municipal Building on Washington Street.

Even long standing traditions have some gaps. The parade was suspended during the 1930’s due to lack of funds, and once again in the 1940’s during World War II because of labor shortages and blackout rules – but it recovered. Five years ago the impact of Superstorm Sandy prevented the event from taking place.

A wide variety of marching bands, decorated cars, floats, plus the usual ghosts, goblins and creepy characters strolled down thru Toms River.

One of the unique features of this year’s parade was a best float category representing the theme of the book “Station Eleven,” which Toms River Regional School students read as part of a grant awarded by the National Endowment of the Arts (NEW) Big Read Program.

“Station Eleven,” written by Emily St. John Mandel, concerns a post-apocalyptic world where a flu pandemic wipes out the population and a traveling symphony forms, putting on Shakespeare plays to keep the arts and humanities alive for the remaining survivors. Costumes reflecting post-apocalyptic worlds, Shakespeare, emergency preparedness, traveling symphonies, and the book’s connection to Superstorm Sandy were all encouraged.

For a full listing of the winners of the night’s parade visit http://www.trfc1.org/halloween.html 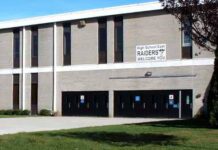 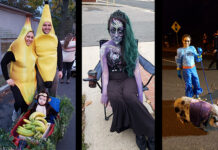 Toms River: Trick Or Treat Is On Halloween