WARETOWN – Though the vote tallies are still unofficial, the ballot measure increasing the school district’s tax levy by $840,000 appears to have passed.

The referendum received a 51.01 percent voter approval rating among the 4,074 votes cast. There were 48.99 percent of voters against additional school funding. The most recent unofficial numbers released by the Ocean County Clerk’s office show a mere 82 votes made the difference. The tallies become official after the clerk certifies them, which usually takes a couple of weeks after election day.

“This is not something that is going to happen every year,” reassured Dr. Christopher Lommerin, Superintendent of Schools. “I believe we are set for another five years.”

School districts are capped at two percent annual tax increases because of a state law and are required to ask voters for any amounts in excess. In this case, the $840,000 represents the cost of keeping eight classroom teachers on staff and maintaining classroom sizes the same.

Ocean Township School District began experiencing budgetary issues a few years ago when the State of New Jersey changed its formula for school aid. The reduction amounts to $4.7 million overall, with further decreases in the next two years.

“We’ve cut everything out of the budget we could,” Lommerin said. “We’re down to salary, benefits, supplies, facilities and operating costs.”

According to Lommerin, programs were cut due to the reduction in funding. However, the district will remain in a position to deliver educational services, and everything required by law.

Some opponents of increasing school taxes claim the local school district employs too many administrators. Lommerin, who plans to retire at the end of this school year, recalled what it was like when he started in 2009.

“We had a special education director and a curriculum director,” shared Lommerin. “And the principals in each of the schools.”

Although he says it’s not his decision to make, Lommerin plans to recommend that the board name one of the principals to take on his job. He ends his career with Ocean Township Schools with a salary of $162,000.

Board of Education President Dr. Shawn Denning said the district has not yet decided whether they would create a dual role for one of the principals or consider sharing a superintendent with another district.

The referendum question may well have been one of the hottest issues in Southern Ocean County. School officials decided the best way to get voters out – was to educate them.

Lommerin and Steve Terhune, Business Administrator teamed up with board members to present voters with a clear understanding of the ballot measure. They did six or seven question and answer sessions in various settings in town hall fashion.

Parents took up the cause themselves and held rallies to encourage voters to support the schools.

Two districts located in the Greenbriar-Oceanaire retirement community showed the most opposition to the referendum, with nearly 64 percent voting against it.

An anonymous flyer distributed within the gated community contained information that Denning said was inaccurate. The school district’s preschool program for example, is entirely funded by the state and classroom sizes set by state guidelines.

The average residential taxpayer can expect an increase that most likely won’t exceed $200 annually according to Denning. This may be adjusted down since it has been set at a dollar amount to be raised rather than a tax rate.

“If there are more people to pay the amount we want to raise,” said Denning. “That’s when the tax rate goes down with more contributions.” 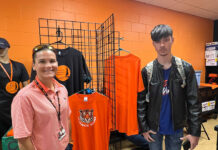