BARNEGAT – Township officials are studying the intersection of Route 9 and Barnegat Boulevard, stating it is dangerous and would like to see it changed.

Committeeman John Novak asked the police to evaluate the intersection during the a Township Committee meeting. When he did so, several residents in attendance spoke out in agreement that it is dangerous.

“I take that way home every day from Toms River and every single day I see a near-miss there,” he said.

The issue, he said, is regarding the southbound lanes. As vehicles are heading south past the TD Bank, there is one lane for going right on Barnegat Boulevard, and the other lane is for both straight traffic and those turning left onto Bayshore Drive.

People stop to make a left onto Bayshore Drive. Drivers a few cars back might not realize that person has stopped, he said. This would lead to a rear-end collision. Additionally, when a car is stopped, attempting to make a left turn, a lot of drivers will veer into the other lane to get around that car. This causes a lot of dangerous situations as well.

He proposes making the left lane a left-turn only lane. The right lane would be a straight lane. Then, he suggests building a third lane that would be only for right turns onto Barnegat Boulevard. That lane would need to be built through a county-owned field at the northwest corner of the road.

Since Route 9 is a state road, and Barnegat Boulevard is a county road, he said he does not expect change to come quickly.

Lt. Keith Germain said that the police have been very concerned about that intersection as well.

From April of 2014 until April of 2017, there have been 35 motor vehicle crashes there. This amounts to about one a month.

“That’s clearly indicative of an issue,” he said. Statistics aside, it is an intersection that locals know is dangerous.

None of the crashes were fatal, thankfully, he said. Most of the crashes occur when vehicles are traveling at a slow speed. However, because it is a crowded area, it can easily become a three- or four-car fender bender.

Making the problem even worse is that any crash there will tie up traffic on busy Route 9. This leads to an unsafe situation further down the road, he said.

The traffic safety department will be investigating it further, he said. 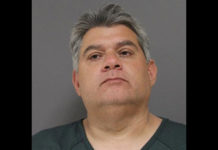