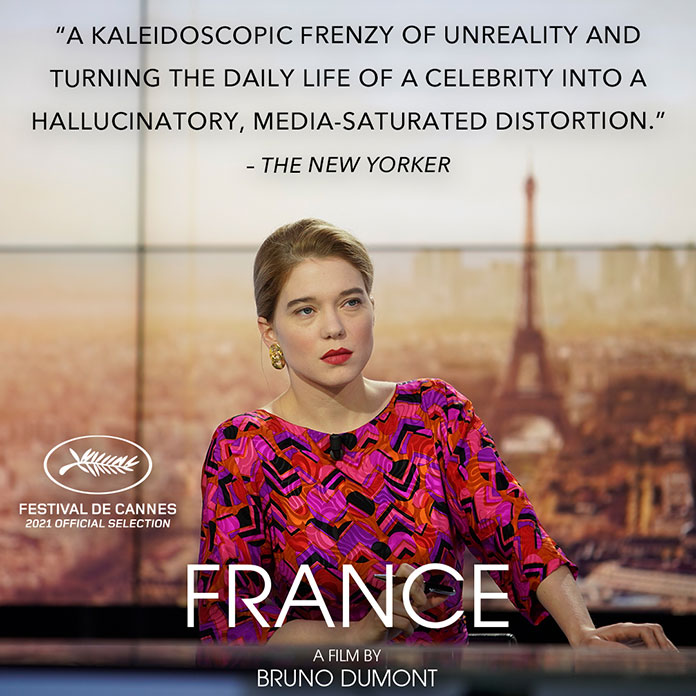 LONG BEACH ISLAND – The Lighthouse International Film Society is pleased to present the virtual screening of FRANCE-(French with English subtitles)- a new film by Bruno Dumont. Lea Seydoux primarily holds the center of Bruno Dumont’s unexpected new film, which starts out as a satire of contemporary news media before steadily spiraling out into something rich and darker. Set in contemporary Paris, FRANCE stars Seydoux as France de Meurs, a seemingly unflappable superstar TV journalist juggling her studio show, reporting on a distant war, and her rush of family life. Her high profile world is turned upside down after she injures a delivery man in a traffic accident, triggering a series of self-reckonings and a strange romance that proves impossible to shake. Never one to shy away from provoking his viewers, Dumont’s latest is tragicomic and deliciously ambivalent- a very 21st-century treatment of the difficulty of maintaining identity in a corrosive culture.

The Lighthouse International Film Society will have a VIRTUAL screening of Bruno Dumont’s FRANCE.

Screen anytime from January 14- 31. If you are so inclined to have some French wine while watching, head over to Shell Liquor…they are offering 10% off of all French wines during the screening dates. And if you are interested in joining our French Wine, Cheese and Chat Happy Hour, meet us on Zoom on Sunday, Jan 30th from 5:00-6:00pm, link below!

To Screen (Tix $12):For Tickets and information go to www.lighthousefilmfestival.org

A special thanks to our sponsors-The Ocean County Cultural and Heritage Commission, Long Beach Island Foundation of the Arts and Sciences and LBI Shell Liquors, who made bringing this film to LBI possible.

Shell Liquor is offering 10% off French wines- with the mention of the film and Lighthouse International Film Society.