LACEY – After serving the township for a quarter of a century, Capt. Patrick Ganley retired recently.

Ganley started with the department in 1996, and worked his way up through the ranks. He became a sergeant in 2005 and a lieutenant in 2014. He made captain in 2016. In this role, he oversaw daily operations, which included such duties as training and internal affairs.

Other roles involved working for the Office of Emergency Management, particularly during Superstorm Sandy. He was a member of the Ocean County Regional SWAT Team, was a department firearms instructor and armorer, and was heavily involved in our department’s active shooter training program.

Police also noted that Captain Ganley served in several unique and different roles while working for the police department, including, but not limited to, mechanic, painter, electrician, builder, janitor, snow remover, and whatever else he needed to do to ensure the operations of the police department continued.

I would also like to note that Captain Ganley took his education very seriously. He is a graduate of the New Jersey State Association of Chiefs of Police Contemporary Supervision Program, and holds both a Bachelor’s of Arts Degree and a Master’s Degree in Administrative Science from Fairleigh Dickinson University.

“On a personal note, I will certainly miss Captain Ganley. Throughout my career he has been a colleague, peer, friend, mentor, a teammate, and more importantly a brother. I am sad to see him go, but happy and proud to see him enjoying a retirement so well deserved,” Chief Michael C. DiBella said. “Captain Ganley, all of us at the Lacey Township Police Department thank you for your hard work and dedication to the residents of Lacey Township.” 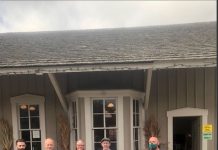