LACEY – Two of the township’s biggest public events of the year are Lacey Day, usually held in August, and September’s Apple Festival. This year, those events merged seamlessly into one mega Macintosh-sized program and the turnout went beyond expectations.

“Lacey Day and the Apple Festival are two long-standing and proud traditions in Lacey Township. It just made sense to combine the events and transition them into the fall season instead of the heat of August,” Township Mayor Peter Curatolo said.

“We’re hoping for about 2,000 people today. It looks like we have quite a crowd,” Township Recreation Director Jim Wioland said early in the day.

The event retained the festive fall flavor of the Apple Festival within the large space of Gille Park where Lacey Day is held. The Apple Festival is traditionally held behind the Forked River Firehouse and Lacey Historical Society Museum off Route 9.

Lacey Historical Society President Eleanor Ditton said gathering more volunteers to coordinate the Apple Festival was a factor but was happy to see so many turn out for the day’s event. She was also pleased that the tradition of showcasing the township’s history was still in place.

Antoinette Kozlowski, a former Lacey resident who now lives in nearby Beachwood said, “I feel (combining the two events) will make it more fun.” She brought along her three daughters who, along with friends, donned colonial era attire provided by the Lacey Historical Society for a photo in front of a special backdrop created by members and set up for the occasion.

Historical Society member Pat Perrini, a former seamstress in town, made the special outfits including a child’s version of a George Washington costume.

“I made them in a year’s time from fabric provided by the organization. It is adding to the fun,” she said.

Members of the Lacey Rotary Club once again assisted with food preparation which is a role they held for years during Lacey Day. This year, however, the local Rotarians did not have to work the grill. Instead they distributed hundreds of premade sandwiches that were donated by various businesses in the community.

Interact Club members, the youth segment of the Rotary Club, featured a table manned by Sierra Reilly, Stephanie Cucinello and Hailey Carskaddan. The high school students were selling apple slices with caramel topping as a fundraiser for their group.

The apple pie contest featured 14 adult entries and 24 youth entries, 17 of which were from high school students, according to Cassandra Shank, a Lacey High School student and member of the National Honor Society.

Resident Mike Adamski has served as a judge for the contest for over 15 years. He said he was up for the task again this year and didn’t find it daunting at all.

“It is an acquired skill to judge these pies,” fellow judge Karl Metz said with a laugh.

Mayor Curatolo and members of the township committee joined Guadagno and Vicari on stage welcoming the attendees present. Curatolo said, “I’d be remiss if I did not thank our business community, which donates thousands of dollars worth of time and food products so our families can enjoy the day at no charge.”

Curatolo noted that Walmart was a new sponsor with a number of local businesses that helped make the festival a success.

The event also allowed for the showcasing of many township organizations such as its Chamber of Commerce, Republican and Democratic clubs, school district organizations and many more. Various vendors and township businesses were also present.

“What makes me most proud as mayor is to see the broad participation we see throughout the town at every major event whether it be Fourth of July Fireworks, Lacey Fest or the Municipal Alliance 5K,” Curatolo said.

“Our people are what make Lacey a great place to live, work and recreate,” Curatolo said. The mayor added that next year this event “will officially be re-branded to Lacey Fest so as to honor the history of both events.” 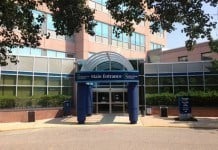