LACEY – Police charged a man with luring and attempted sexual assault after he was caught in a YouTube video meeting with someone he expected to be an underaged girl.

Phillip Stone, 33, of Lacey allegedly went to meet with a 14-year-old girl, but instead was confronted with a man recording the encounter for a video about online sexual predators. Stone is considered innocent until proven guilty.

Regardless of its success, police had a message for the public: Don’t try this at home.

“Investigations into alleged criminal activity must be conducted by trained law enforcement officials – with the assistance of members of the public when and where appropriate,” Ocean County Prosecutor Bradley Billhimer said. “Private citizens who take it upon themselves to investigate what they believe to be criminal conduct may compromise the potential investigation. They can also find themselves in a very dangerous situation. Please leave criminal investigations to the professionals. We are very fortunate that no one got hurt today and we were able to take a child predator off the street.”

The channel that filmed the video is called “Minority Vs. Predator.” It proposes to show just how easy it is for children to fall victim to sexual predators they might find online.

In the video, the host struck up a text conversation on the app called Skout where he posed as a 14-year-old girl. He then agreed to meet with Stone at the Five Guys restaurant in Toms River, and then go to a hotel.

The video, which contains coarse language and graphic conversation, details the texts between “Steve (which is what he called himself)” and “the 14-year-old girl.” Upon arriving, the video host records a conversation with “Steve,” and tells him that he’s going to interview him as part of a psychological study. “Steve” said that his mother passed away last year, and ever since then “I’ve done nothing but eat, do drugs, and be a philanderer.” And, he noted, that he has some tendencies that are very wrong.

The host indicated he had a connection with someone in Lacey police and they would be getting a call. It is unknown if that happened.

However, some people on social media deciphered the man’s identity. This has resulted in them attacking him online, giving his employment negative reviews, and suspecting that he will either be a victim of a vigilante or suicide by the end of this. Instead, he was arrested. The office where he allegedly worked released a statement that he had been fired.

The video was uploaded on March 1 and on March 2 officers from the Ocean County Prosecutor’s Office High Tech Crime Unit and Special Victims Unit began an investigation. This investigation revealed that he had believed that he was chatting with a minor, arranged a meeting, and solicited the minor for sex.

Editor’s note: This story had been updated from previous versions, adding the arrest details. 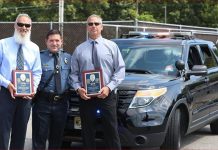