STAFFORD – A cat stuck in a tree for four days and enduring freezing temperatures and wind was finally rescued and reunited with her family.

The cat—a black tabby—was perched 60 feet up in a tree in Ocean Acres early January. The property owners called Stafford Township Animal Control after the cat had been in the tree for four days and seemed unable or unwilling to make the climb down.

Tree service owner Charles Kochman and Ken Updegrave, the lift bucket operator, set up their equipment on the Lanyard Road property. They were able to retrieve the cat with ease.

The cat, now christened “Miracle,” was taken to Stafford Veterinary Hospital for evaluation. Despite her time outdoors in frigid temperatures, she received a good health report.

Miracle was taken to Southern Ocean County Animal Shelter where she was reunited with her family.

“The Stafford Township Animal Control staff would like to thank Manahawkin Tree Service, Charles Kochman, Ken Updegrave, fellow employee Fire Official Heidi Michel and the staff of Stafford Veterinary Hospital and the Southern Ocean County Animal Shelter for their unselfish assistance with recovering and caring for the cat,” a statement on the official Stafford Township Facebook page read. 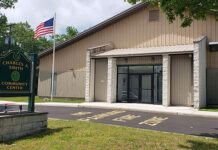