In the early hours on June 22, Troopers Ryan Koehler and Vincent Ferdinandi of Point Pleasant Station followed up on reports stating a dog was seen swimming in the Barnegat Bay.

After taking a vessel out into the bay, they were able to locate Chunk near the Mantoloking Bridge and bring him home safely.

“Chunk, who is three years old, was missing for more than two weeks. Needless to say, he was ecstatic to be reunited with his grateful owners,” New Jersey State Police posted on Facebook. 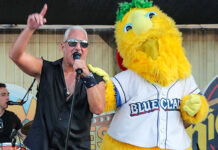