OCEAN COUNTY – It has been called one of the deadliest roads in the state. County Route 539 is a 55-mile stretch of roadway extending from Little Egg Harbor on the southern end all the way into Cranbury in Middlesex County, with speeds ranging from 30 to 55 mph. Spanning multiple counties and dozens of municipalities, CR 539 is a well-traveled thoroughfare for locals, commuters, and even tourists to the Jersey Shore.

Each year CR 539 sees hundreds of accidents, a majority of which occur along the Ocean County section of the road. Through constant police patrol and even the occasional heightened enforcement detail, the road remains one of the most dangerous in the area.

This begs the questions: what makes CR 539 so perilous and what can be done to fix this?

Less than a month before that, on Oct. 6, 2019, a motorcyclist was killed on CR 539 in Manchester when his bike crashed into another vehicle.

On July 12, 2019, one person was left dead following an accident on CR 539 in front of the New Egypt Speedway in Plumsted.

On May 30, 2019, a motorcyclist succumbed to his injuries sustained during a serious crash on CR 539 in Plumsted earlier in the week.

On May 7, 2019, a 78-year old woman was killed when her car collided head-on with a vehicle driving the opposite direction on CR 539 in Lacey.

And these are just the fatal crashes reported. Year-to-date statistics on the total number of accidents on CR 539 are not readily available for 2019.

Governmental officials and local and state law enforcement agree: CR 539 is a hub for accidents.

According to NJ State Police (and the reported crashes listed above), Ocean County has already seen five fatal crashes on CR 539 since the start of 2019. So far no fatal accidents have been recorded on the stretch of CR 539 that runs through Monmouth, Mercer, and Middlesex Counties.

Over the years, the road has been the focus of improvement projects and several enforcement detail programs, as it is considered “high risk” for travelers.

In 2015, the Ocean County Prosecutor’s Office teamed up with local law enforcement to conduct a crackdown on the road. According to a Patch article written post-crackdown in 2015, law enforcement in Ocean County responded to 284 crashes along the Route 539 between January 2013 and May 2015, 11 of which yielded fatalities.

These improvements were meant to reduce wet weather accidents, sideswipes, and crossover accidents as well as improve nighttime visibility, according to county officials.

“We were stopping cars for any violation…for education purposes,” Mazur told Jersey Shore Online. While not every motor vehicle stop yielded a ticket, all stops incorporated some sort of information pertaining to the rules of the road and safe driving along CR 539.

Mazur highlighted speeding and unsafe passing as the most common cause for accidents on CR 539. For the most part, the road is a two-lane highway bordered only by trees and the occasional residence or commercial location. It is only once CR 539 reaches into Plumsted that it becomes a bit more commercial, but still maintains two lanes.

Major intersections along the Ocean County portion of the road include: Route 72 in Barnegat Township, Routes 530 and 70 in Manchester, the Garden State Parkway entrance in Little Egg Harbor, and CR 528 in Plumsted.

When someone tries to pass five cars at once and finds themselves face-to-face with a tractor trailer, or when someone is speeding way over the posted 55 mph speed limit: “That’s usually how accidents happen,” Mazur added.

Jersey Shore Online reached out to the corresponding police departments for figures representing their portion of the road since January 2019.

For Stafford Township, Capt. James Vaughn reported 9 total accidents on their portion of CR 539 since the start of 2019. Of that total, none were fatal, none were due to alcohol or drugs, only one involved minor injuries, three were non-reportable “meaning there wasn’t enough damage to take a report,” and three involved a vehicle striking a deer.

“Of the remaining 3 accidents, the reports indicated ‘driver inattention.’ However, speed wasn’t documented or indicated in the reports,” said Vaughn.

Vaughn noted that Stafford Township Police patrol CR 539 on a regular basis, but they are not responsible for a large portion of the road. Most often, Stafford patrols the Warren Grove section of Stafford Township, Vaughn added.

In Lacey Township, Capt. Patrick Ganley reported 308 motor vehicle stops on CR 530 so far this year, 297 of which were for speeding. In addition:

In Barnegat Township, Lt. Jason Carroll reported 11 accidents on CR 539 so far this year, none of which were fatal or involved drugs or alcohol.

“Four of the collisions were vehicle versus deer and the other seven were attributed to driver inattention or following too closely,” Carroll told Jersey Shore Online.

Barnegat Police, like Stafford, patrols their portion of CR 539 regularly and also participates in enforcement initiatives with the Ocean County Prosecutor’s Office and Sheriff’s Department.

In Manchester Township, there were 36 crashes reported this year up to Oct. 23, 27 of which had no injuries. Of these, 11 of them involved animals, most likely deer on those long stretches of tree-lined roads. They were mostly during daytime with dry conditions. The most serious one was the aforementioned fatality involving a motorcycle on Oct. 6.

“We routinely patrol County Route 539 on a daily basis,” said Sgt. Antonio Ellis. “In addition, we have participated in grant-funded traffic enforcement operations along with the Ocean County Sheriff’s Department during the summer months, specifically on County Route 539.

“There are portions of County Route 539 that are difficult for officers to safely conduct traffic stops on the northernmost and southernmost boarders with the township due to limited roadway shoulders,” he said. “We focus enforcement more near the intersections of State Highway Route 70 and County Route 530 where officers can pull over motorists in a safe location.”

In Jackson Township, CR 539 only spans about .5 miles before reaching into Plumsted, according to Capt. Steve Laskiewicz. On that small stretch of road, Jackson Police responded to two accidents this year, one due to road conditions and the other was actually in Plumsted.

Little Egg Harbor, and Plumsted Township Police Departments did not respond to Jersey Shore Online’s request for crash statistics as of press time.

On a larger scale, Officer Mazur provided crash statistics on CR 539 for the entirety of Ocean County in 2017 and 2018. Aside from the results of the Ocean County Sheriff’s Traffic Enforcement program, Mazur said comprehensive statistics of this kind were not yet available for 2019.

Only one of those 183 accidents was fatal and this occurred in Plumsted due to driver inattention, said Mazur. One accident involved serious injuries and 12 involved minor injuries.

Four of those 190 accidents were fatal and 10 involved minor injuries.

What we can glean otherwise from the figures is that distracted driving and speeding are the most prevalent risk factors along CR 539.

Mazur noted that there are typically Sheriff’s officers patrolling parts of CR 539 every day, in addition to patrols by local police departments.

“They aren’t assigned [to patrol the road], but they make it a point to go over there,” said Mazur.

As mentioned, local police departments are aware of the current state of affairs on CR 539 and also make it a point to consistently patrol the area.

Even government officials who might not travel CR 539 regularly understand the dangers of the road to locals, including pedestrians. On Oct. 31, 2019, Sen. Cory Booker (D-NJ) sent out a press release calling for the construction of a bridge over CR 539 near Joint Base McGuire-Dix-Lakehurst (JBMDL).

Booker (D-NJ), along with Sen. Robert Menendez (D-NJ) and US Representatives Andy Kim (D-NJ), Donald Norcross (D-NJ), and Chris Smith (R-NJ), sent the letter as a request to the US Air Force (USAF) to build an overpass over 539, “which splits Joint Base McGuire-Dix-Lakehurst (JBMDL) and puts at risk the safety and welfare of civilians and military personnel in New Jersey.” In a letter, the lawmakers asked the USAF for assistance approving the construction request, which if funded would put an end to preventable accidents caused by “the dangerous combination of civilian and military vehicles that utilize the road daily.”

These NJ representatives called CR 539 “treacherous” and “the fifth-deadliest roadway in New Jersey four years in a row.”

As for the drivers, those who routinely travel CR 539 might want to heed the warning embedded in these figures; speeding and distracted driving are cause for a majority of accidents on this road, from benign to fatal. 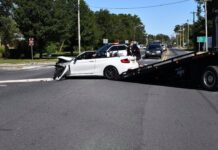 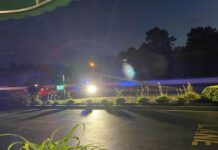