TOMS RIVER – In a cooperative effort, the Performing Arts Academy, currently headquartered at Joint Base McGuire-Dix-Lakehurst, will be moving to a brand new building that will be built on the campus of Ocean County College, officials said.

The Performing Arts Academy is a wing of the Ocean County Vocational Technical School system. The academy offers four majors: theater, vocal, dance and audio engineering, while other Vo-Tech schools focus on other elements, such as culinary or marine science.

It is currently housed at the Joint Base, but county officials said they have no interest in continuing the lease when it expires. Freeholder Joseph Vicari said the 50,000-square-foot building would provide more room than the school currently has, allowing for more students.

The $26.7 million building will likely be built near or adjacent to the Fine Arts Building on campus. Construction is expected to be completed in 2019.

New Jersey will provide 40 percent of the construction cost, or $10.6 million. The Ocean County Freeholders provided $8 million. OCC allocated $2 million to be used to pay down interest costs if necessary. However, Freeholder John Bartlett said the county would float the bond for the construction of the academy, leaving the college with no direct debt.

According to a press release from Ocean County College, the remaining $8 million will come from a donation from the Jay and Linda Grunin Foundation. The foundation is a private family philanthropic fund that supports a variety of healthcare, education, and artistic causes.

“On behalf of Linda and myself and Jeremy and the entire Foundation, we are so proud to support this work,” said Jay Grunin, a co-founder of the foundation, in a release. “It is my audacious hope to create a major cultural hub in New Jersey with this cutting edge academy and the theater on the OCC campus.”

The mission of the Performing Arts Academy is to provide an academically challenging education for creatively gifted high school students, according to the vo-tech.

“The curriculum is rigorous and the students are expected to think critically and creatively,” said OCVTS Superintendent William Hoey. “This new academy will benefit both the high school and college students. We will be sharing the classroom space and can use the other amenities at the college.”

Students learn more than just the performing arts at the academy, according to Hoey. They take regular curriculum as well, and there are college preparatory, honors, and advanced placement classes offered.

Space was one concern that prompted the move, but not the only one. Security at the base has increased since OCVTS renovated Hangar 1 to house the Performing Arts Academy, he said.

“It’s more difficult to do things on a secure military base,” he said.

High School And College Students Together

By having the high school on the college property, students will have access to college courses and facilities, like the library and student center, OCC College President Jon Larson said in a press release.

“Once they complete the academy curriculum, students will be awarded OCC’s associate degree and will be half way to a bachelor’s degree – all for a fraction of the tuition cost of a university degree,” Larson said.

In sharing locations and facilities, there would be high school students spending time with college students.

Hoey said that they don’t anticipate any issues. There has been a high tech high school on the campus of Brookdale Community College since 1991 without any issues regarding the two age groups mingling.

Students will have an option to pursue an Associate’s degree upon graduation. This means that they would be starting a four-year college as a junior. Would they be emotionally mature enough at age 17 or 18 to be taking on junior-level courses and interacting with other juniors and seniors?

“It’s certainly a concern,” Hoey said. He added that the vo-tech has connections with Rutgers University and other schools so that students are getting their credits and moving on to those. They haven’t seen problems with those students when they move on. 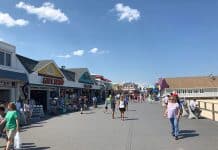 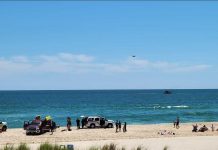 Reports Of Aircraft Crash Off LBI Unfounded, Search Called Off