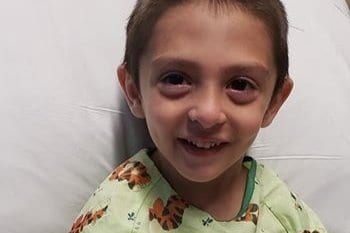 SEASIDE HEIGHTS – A borough family has organized a GoFundMe campaign to secure funds for their 5 ½ year old son who is suffering from a rare brain condition.

“Doing this is so hard but I know we need the help. We do not know where to turn at this point. Our hearts hurt so badly. Our beautiful son, Charles, has been given the biggest challenges a child could go through,” his mother Ashely Massa said.

“Our biggest struggle is something called Chiari Malformation which is when the cerebellum tonsils herniate past the Foramen Magnum. There are numerous different types and Charles started with Chiari 1 Malformation and now has Chiari 1.5 Malformation,” Massa said.

The difference is now Charles’ brainstem is herniating as well. “This is causing him numerous issues and he is getting worse and worse. He has had two decompressions,” Massa said explain that this type of surgery is meant to help with the symptoms-it does not go away and has had a shunt placement after he developed Hydrocephalus following his operation.

Family members were heartbroken after learning the results of his latest MRI which showed Charles “needs to get to California to see the only neurosurgeon that could possibly help. He is our only hope and just to get the second opinion for him to look at his imaging and everything is $700,” Massa said.

The family wants to fly out to see the neurosurgeon.  “We are not guaranteed flights with any organization but no matter what I would need to pay for my mom since she would need to come with me to help with our daughter,” Massa said.

Hotel costs are also a concern of the family as  a room at the hospital is not guaranteed. “With that comes a rental car, food and things like that. Insurance will not be paying for this appointment or future appointments or surgeries in California,” Massa said.

Massa said that she learned from other families that have done what they are planning that the hospital will possibly make a payment plan “but even then we cannot afford it.”

Charles sees over 10 specialists at this point and most of them are in Philadelphia which means at minimum a two hour drive at $20, $5 tolls and $4 for parking from their Ocean County home.

Massa’s son now has Epilepsy “that we think is because of his Chiari and the damage it is causing. It isn’t just Chiari that he suffers from, at 15 months old he was diagnosed with DiGeorge Syndrome which is a chromosomal deletion,” Massa said.

“This causes numerous things as well including immune issues that cause Charles to need to go to Childrens Hospital Of Philadelphia monthly for IVIG therapy.
The funds from the gofundme campaign will be used various expenses while Charles and family members are in California.

“It is becoming harder and harder to afford traveling to CHOP,” Massa said. She added that after surgery “we will need funds for us to be out of work and in California.

Massa expressed thanks to those that have supported the family’s effort. “This is our last option and we do not know what else to do. Thank you for your support.”

To learn more or to donate to Charles visit this link!