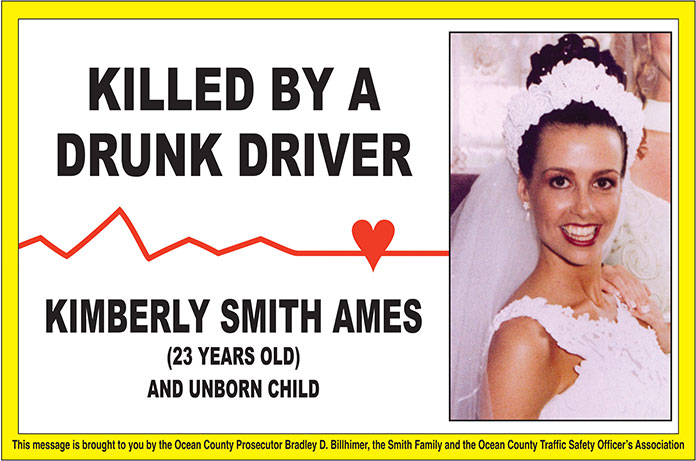 The campaign was announced on the eve of what would have been the 45th birthday of Kimberly Smith Ames of Beachwood.

She was a 23-year-old newlywed, three months pregnant with her first child, when she was tragically killed by a drunk driver on Oct. 7, 1998 in her hometown. In the aftermath of her tragic death, her photo became part a state-wide DWI awareness campaign featuring billboards and signs posted in local stores.

Prosecutor Billhimer re-introduced her story to a new generation and new billboards have been created with the blessing of the Smith family.

Billboards began being placed throughout Ocean County on July 28. Kimberly’s unborn child would have been 21 years old.

“Growing up in Ocean County, I was friends with Kimberly’s older brother and sister. I remember vividly the pain and sorrow her family went through dealing with the loss of Kimberly and her unborn baby,” Billhimer said.

He added, “to this day the family is still grieving. It was my honor to reconnect with the Smith family and to have their full support with the re-launching of this campaign. I hope that people will see Kimberly’s face and think twice about getting behind the wheel when they are impaired.”

This award’s purpose is to bring public awareness of the commitment and determination of police officers within Ocean County concerning the education and prevention of Driving While Intoxicated offenses and acknowledging officers who have demonstrated such commitment.

Offshore Wind Could Be In Jersey’s Future