CAPE MAY – This past weekend, the Coast Guard rescued seven people from a sport fishing boat encountering extreme weather 69 miles southeast of Cape May.

At the time, winds were gusting up to 30 knots in the area with 4-to-6-foot seas. Around 1:19 p.m., watchstanders at Coast Guard Sector Delaware Bay received a report from Coast Guard Sector Virginia saying that a 40-foot sport fishing boat with seven people aboard had been beset by weather with seas reaching about 10 feet.

Coast Guard crews aboard an MH-60 Jayhawk and an HC-130 Hercules aircraft from Air Station Elizabeth City, North Carolina, and a 47-foot motor life boat from Station Indian River were launched to help.

All seven people were lifted and brought to Coast Guard Air Station Elizabeth City where local EMS was on standby to aid any injuries.

“One of the scariest and most unpredictable places you can be is out on the water in a storm,” said Petty Officer 1st Class Christopher Petrenko, an operations specialist with the Sector Delaware Bay command center. “Fortunately, they had life jackets, a registered EPIRB and a radio, which they used to call for help. If any one of those pieces had been missing, we might not have been as successful as we were.” 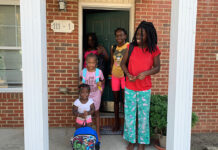