What appears to be a meteor lit up the Tuesday night sky.

Hundreds of people on the East Coast, from Maine to South Carolina, reported seeing the blaze around 11 p.m. EST.

Some Cape May County residents felt their homes shake as the object passed, NJ.com reported. Most of the reported sightings focused on South Jersey, and not Monmouth or Ocean counties. 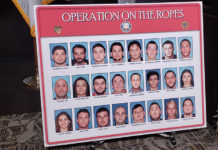