BURLINGTON COUNTY – A raging forest fire that tore through 3,500 acres of Wharton State Forest northeast of Batsto Village last week is under control after five days of burning.

Comments posted to social media in response to Jersey Shore Online’s initial report of the fire revealed residents could smell the burning trees as far as Toms River, Manchester and Brick Townships.

“As of earlier this morning, the fire is now 100 percent contained and 100 percent controlled,” said New Jersey Department of Environmental Protection (NJDEP) spokesman Bob Considine in a July 24 statement.

An investigation led by the New Jersey Forest Fire Service determined that the cause of the fire was a lightning strike that came down on three trees, including a large pine tree, on the evening of Wednesday, July 19. A fire started and then spread to other trees in the forest. The blaze was not discovered until 1:20 p.m. the next day, when it was seen from a tower.

According to the NJDEP, on Saturday, July 22 the fire was only about 70 percent contained.

“Night crews were successful with patrolling and holding containment lines, with overnight rains aiding mop-up and suppression efforts with the fire. Mop-up operations will continue as needed over the next few days,” said Considine.

The State Park Police, New Jersey State Police, Burlington County Fire Marshall and New Jersey Division of Fire Safety assisted with the investigation into the cause of the fire.

Local volunteer fire departments and emergency medical services out of Burlington County were also on hand to help squelch the flames. Fortunately, no homes or businesses were threatened during the five-day ordeal. While the cause of this particular fire was natural, the NJDEP warns that most forest fires are the result of human activity – whether in error or by deliberate actions.

More information on fire safety can be found at state.nj.us/dep/parksandforests/fire/wildfire-prevent-edu-outdoor.htm. 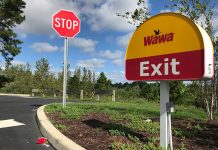