EGG HARBOR TOWNSHIP  – An Atlantic City man was arrested after allegedly leaving his three-year-old son unattended in a car for three hours in the sweltering heat Saturday.

Brandon Morgan, 32, was inside a Chickie’s and Pete’s in the English Creek Center shopping center in the Cardiff section of town eating lunch while his child was in the car.

Bystanders took the child from the vehicle before police arrived.

Morgan was charged with endangering the welfare of a child.

According to reports, the child was found in good health by emergency workers. The child was released to his mother. 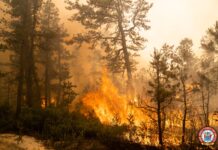