The former case worker allegedly sent images of child sex abuse via Tumblr. Authorities were granted a search warrant of his home and on April 12 recovered thousands of child pornography images from Frazier’s phone and other electronics. Frazier, who was found with a minor in his home, and that minor appeared in some of the photos.

Frazier was arrested on April 15 by the Atlantic County Prosecutor’s Office and charged with child endangerment, and has been detained without bail.

He is facing a possible 50 years in prison and $500,000 fine if convicted and given the maximum sentences. 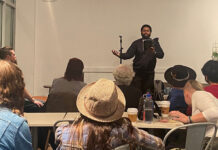 Post-COVID, Poets Are Sharing Their Words With The World