MANCHESTER – While the township is deemed a non-partisan community when it comes to their form of government, voters will choose between two Republicans in the contentious mayoral race on November 2.

Both candidates have running mates seeking council seats. Mayor Robert Hudak has Michele Zolezi who was appointed to the council filling his vacant spot in July. Robert Arace is running with Joseph Hankins who has a long association in the township as a member of the fire company.

The township had some dramatic changes during the early summer with Mayor Ken Palmer resigning in June to take a New Jersey Superior Court judgeship. The remainder of his term was taken over by Councilman Robert Hudak just days later. Hudak is the Assistant Planner in Toms River.

Hudak is being challenged by Robert Arace who is also a Republican.

Arace said, “my wife, Deanna, and I moved to Manchester in 2018 to start our family here after getting married. I am 28 years old and I graduated from Monmouth University with a degree in finance. Professionally, I am a Principal Consultant in a tech consulting company, and I specialize in Marketing and Analytics, working with mid-size to large companies to enhance their business strategy and demand generation.”

He added that he was an entrepreneur and businessman “who started a small tech firm to help small, local businesses survive and grow during the COVID-19 pandemic. My job as a Principal Consultant is centered on problem solving. A business comes to me with a problem and it’s my job to find creative solutions to fixing the issue at hand. As mayor, I would look at our Township budget and Master Plan to identify problems and work to find solutions to fixing them.”

“Manchester is a great place to live, raise a family, and retire to. We need to make sure we elect people who will protect the integrity of our town and improve the quality of life for our residents. Its time Manchester had a team that was willing to work hard for them and Joe and I are ready to roll up our sleeves and get our hands dirty,” Arace said.

Hudak said, “my wife Ellen and I, along with our three school-age children, Michael, Andrew, and Christina have lived in the Pine Lake Park section of Manchester since 2007. Additionally, my mother also recently moved into Leisure Village West. I am 44 years old and by profession, I am a licensed land use planner and have served in various municipalities throughout the state.”

“Having worked in both state and local government for over twenty years and in various parts of the state, the most important asset that will assist me in serving as mayor is my professional experience. Unlike my opponent, I have experience with preparing municipal budgets,” Hudak said.

Hudak said he was running for mayor because “I want to continue to use my background and experience in government land use for the betterment of Manchester Township. I am a firm believer in public service and that it is important to continually give back to the community. Unlike my opponent, I have worked in government and understand how to get things done.”

Hudak concluded saying he had the insight “that permitted me to build a strong team so that my administration could hit the ground running and I also have a strong understanding of municipal budgets and will not need on the job training like my opponent. We are managing a municipal budget just shy of $40 million and a $12.4 million water and sewer budget and now is not the time to bring in an inexperienced team. The biggest difference is I have that experience and my opponent does not. Manchester has a lot of issues that need to be addressed and I have proven that I am ready and able to deal with them.”

Concerning the challenge of maintaining the township’s taxes and monitoring proper fiscal spending and planning in the township, Arace said, “as a newly elected mayor, I would conduct an audit of each department for cost savings and from there, initiate a two-year, 5-year, and 20-year build-out assessment of the town. I would evaluate all township infrastructure for improvements and establish an economic development plan to improve amenities in the town while keeping taxes stable.”

Arace said he would “aggressively advocate for Manchester to obtain grant funding from county, state, and federal entities to help keep our spending and taxes low.”

Hudak noted that Manchester’s budget is “just shy of $40 million-dollar municipal budget, along with $12.4 million dollar water and sewer budget, securing grants, managing a staff of over 270, negotiating with public worker unions, and overseeing the many aspects of municipal government. My experience in land use provides me with a deep understanding of what needs to be done to preserve the quality of life in our town.”

Hudak added that “moving forward, I will continue to work with the Council and ensure that all positions are filled by qualified individuals that not only have the education, but the experience to tackle the many issues that face Manchester Township including stabilizing taxes, controlled spending and finding ways to expand services.”

Regarding the tax base Hudak said, “upon taking office, my first move was to work with our chief financial officer to review an inherited budget from my predecessors’ administration so that I understood what expenses were budgeted for this year. After this meeting I imposed a temporary discretionary spending freeze and ordered a top to bottom review of each department’s budget. I am a firm believer in zero based budgeting which means that each department is required to justify every expense.”

Hudak said he hired a business administrator who shares this same philosophy and “has over seven years of experience in that role with other municipalities providing a solid background in municipal budget and finance.”

When asked how he felt this transition has progressed since June and how, as mayor he would look at some of the future hires/transitioning given pending retirements, Arace said, “the uncertainty of change is one of the primary concerns that Joe and I have heard from our residents as we have gone door to door to listen to our community. Our police department has transitioned from one great Chief, Lisa Parker, to another, Chief Bob Dolan; Chief Dolan has and will continue to serve his community well. Luckily this transition occurred under Mayor Palmer’s administration; there was never doubt that Mayor Palmer would leave our police department in good hands before his departure. Ultimately, our residents will finalize this transition and choose the direction they’d like to see the township take well into our future.”

“As Mayor, I would request a report indicating potential personnel retirement dates within each department. From here, I would create a transparent recruitment plan. As positions become available, they will be posted publicly to accept resumes to hire the most qualified individual for the position,” Arace said.

Concerning Manchester’s current transition of leadership within the administration Hudak said, “once being unanimously appointed mayor by the Township Council at the end of June, I had to put together a new team since I did not have a business administrator, a human resources director, and a secretary. I quickly assembled a team of respected experts with experience in municipal government that have proved to be assets to the township.”

“My past positions with the state and other local governments assisted me with understanding the exact type of people I wanted in these positions,” Hudak said.

Regarding the addition of the full time-paid fire department working with the volunteer fire companies, Arace noted that “our First Responders are important to Joe and I, and the community they serve. I respect our firemen, both paid and volunteer, however, the way the decision came about could have been handled differently.”

“Our volunteer fire companies, who have served Manchester for decades, did not have a seat at the table when Town Hall was considering a paid fire service. I feel that it was a disservice to our volunteers to not include them in the discussions surrounding this issue,” Arace added.

“The Township is required by law to provide fire service. Our paid department supplements our volunteers when most are working in the daytime Monday through Friday. I am looking to include a maintenance line item in our 2022 budget to assist our volunteers in maintaining our equipment and protecting these vital assets,” Hudak added. 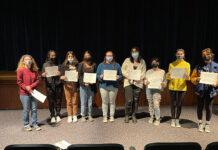 Mayors To Meet About Water Use