MANCHESTER – Township Police Sgt. Antonio Ellis is used to fighting crime but for 102 days he was fighting for his life having contracted the coronavirus.

He returned to his Toms River home on June 17 from Magee Rehabilitation Jefferson Health in Philadelphia and is happy to be reunited with his wife and children.

Ellis tested positive for the virus back in March, and spent around 30 days on a ventilator while in a coma according to Township Mayor Ken Palmer who has been updating the public on his Mayor’s Facebook page.

He was deemed well enough to go back home but his return to Ocean County would include some fanfare.

After being released from Magee, Philadelphia police gave him an escort out of town. They escorted him back to Manchester’s police station. Once there he received a royal welcome back by township employees and by his fellow police officers.

Ellis was also welcomed back by police officers from the Ocean County Sheriff’s Department, Lakewood and Toms River.

Palmer noted on June 17 that, “everyone in town hall and local law enforcement took a collective sigh of major relief because we were able to welcome Sgt. Antonio Ellis home.”

The mayor’s post included that “for the past three months, Antonio has been in a fight for his life after contracting COVID-19.”

During his hospitalization the officer underwent six weeks of intensive physical therapy to regain his strength overseen by the staff of the rehabilitation center.

The police sergeant leads the department’s Traffic Safety Unit. When he arrived he was observed exiting the van and pointing to the message on his T-shirt which said #SURVIVOR.

Ellis has also served as an instructor at the Ocean County Police Academy and is an accredited traffic accident reconstructionist. He is also a radar instructor.

His police experience also includes being a drug recognition expert, and was successful in obtaining grants involving DWI prevention and the Move Over Law.

His stop in Manchester wasn’t his last however. From police headquarters he was then transported to his residence in Toms River, who had prepared their own welcome reception for him.

Neighbors and area residents were on the street, many sporting T-shirts that read “364 Strong” on the back that number represents the officer’s badge number. The music of several bagpipers was heard as they performed for him. Residents and friends signed a large banner that hung outside his home.

A police helicopter did a flyover in tribute to his return and he was welcomed back on the Facebook page of the Ocean County’s Sheriff’s Office. “Our office was honored to escort him home with our fellow brothers and sisters. Miracles do happen and prayers work. God Speed!” a post stated. 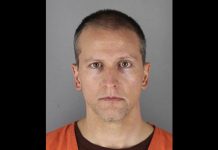