MANCHESTER – It was a solemn day of remembrance as nearly 100 residents of the township gathered outside the Whiting Volunteer Fire Company Fire House to recall the attacks on America that took place on September 11, 2001.

The ceremony was hosted by members of the Whiting Fire Company, Township Recreation Department and the Mayor’s office. It featured keynote speaker Rocky Raimondi, a retired member of the New York Fire Department.

Raimondi, who lives in the Pine Lake section of Manchester, recalled that fateful day. He had left the Bronx fire station he worked at early to return to New Jersey and his greatest fear was that his brother firefighters had all perished in the attack.

Prior to the ceremony, Raimondi told The Manchester Times “I was born in Toms River and became a fireman in 1998 and was a probational firefighter working in Manhattan and on the morning 9/11, I was coming off of rotation and I just returned from the Bronx. I left early to go surfing. It was a miracle that I wasn’t there.

“After the Towers went down, I was able to make my way back to Manhattan by 11 a.m. thinking my whole firehouse was gone, dead. We didn’t even know they were alive until that night. It was pretty intense. I remember everything as if it was yesterday,” he added.

Raimondi said, “it was frustrating because there wasn’t much we could do at the time. It was so dangerous down there and we couldn’t get anywhere near it. Frustration, anger, all those emotions.

“Initially, I thought it was just a small plane and then when I had a look at it, I couldn’t believe it. To see that kind of damage in the city. It looked like a war zone. I thought torpedoes had hit. It looked like a bomb had gone off – not a plane. The smell of jet fuel and to see the pulverized concrete are things I will never forget either,” he added.

“I thought all my guys were dead and that evening we saw them and a flood of emotions had come out. I was hugging them saying ‘I can’t believe you made it through.’ When I think of 9/11 and how we all came together afterwards. No one is going to treat us like this. George Bush was our leader and I felt a sense that we are all going to get through this.

“We’re going to protect each other and have resilience. We have ever since gotten better and stronger,” Raimondi said. He noted in his speech the spirit of brotherhood and camaraderie that firefighters, police and first responders have.

He also noted a phone call he received from Tom Donnor, a firefighter at the Whiting Fire Company who said “they were all going back to New York to help with the recovery. That is something I will never forget and that touched me. They had my back and they came to help.

“We were doing 24 hours on, 24 hours off at that time and during the whole month of December I was down there specifically doing recovery efforts at the Trade Center. They had task forces at the time. Eight or 10 of us with a chief would go to sections while the grapplers would look for body parts and anything we could find that would help identify a person. I lost 20 friends; one was Jeff Stark and I told his mom I’d look for her son and we did. We were there until May. The recovery was over and it was just cleaning out. The amount of concrete and steel that had to be moved was unbelievable.”

Mayor Robert Hudak served as host of the event introducing the guest speaker and young singer Marisiya Goins who sang “The Star-Spangled Banner” and “Amazing Grace.” Jurissa DeOcampo performed “Taps” at the end the event. The mayor later read a proclamation proclaiming September 11 as Patriot’s Day.

“We want to remember today the bravery of those who gave their lives and those who are still suffering from the long term effects of that day,” the mayor said.

On display at the front of the fire station bays was a cross made of metal from Ground Zero. It was made as a gift to Reverend James Davis, the retired pastor of Whiting Methodist Church who serves as Manchester Township Police Chaplain. Davis provided the invocation and benediction during the program.

Reverend Davis told The Manchester Times, “I was one of the chaplains on scene there for nine months. Some weeks every day. A couple of the iron workers who knew me and my partner made two crosses and gave it to us as part of the recovery team.”

The Women’s Auxiliary of the Whiting Fire Company prepared a luncheon for attendees after the ceremony that included a specially decorated cake. The luncheon held inside the firehouse provided an ideal setting for residents, officials, firemen and police to welcome each other in that camaraderie that keeps us together. 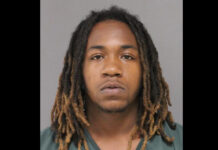