MANCHESTER – Thanks to the public’s help, police have been able to identify the man who shoplifted from the Lowe’s Home Improvement store in Manchester.

After conducting an investigation, Ptl. Sage Sysol from the Manchester Police Department learned that a Dewalt Miter Saw valued at $599 was taken from store without payment. Sysol later obtained video surveillance of the suspect shoplifter and his vehicle.

On April 5, the Department posted two images of the shoplifter and his vehicle to their social media pages. Later that day, the Department received a private message from a concerned citizen who provided a potential name for the suspect. A second investigation was conducted by Detective Joseph Fastige, which confirmed the identity of the suspect.

The suspect was identified as Jose L. Echevarria, 39-year-old male, with a last known address in Pleasantville. Currently, Echevarria’s whereabouts are unknown. He now has an active arrest warrant for shoplifting as a result of this incident.

If anyone has any information about Echevarria, contact the Department at 732-657-6111. You can also use the anonymous tip line website at: manchesterpolicenj.com/investigations-bureau/tip-line. 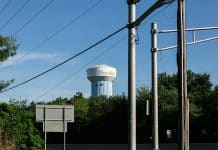