MANCHESTER – The operator of a dump truck died in a crash on January 6 on the Garden State Parkway according to the New Jersey State Police.

Manchester resident Brandon Lawson, 24, was pronounced dead at the scene after his truck veered off the road around 2:30 p.m.

His vehicle hit a guardrail then overturned into an embankment in the median southbound on milepost 37.4.

State Police reported Lawson was pronounced dead at the scene.

Lakehurst Looks To Improve Downtown In 2021 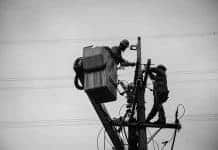